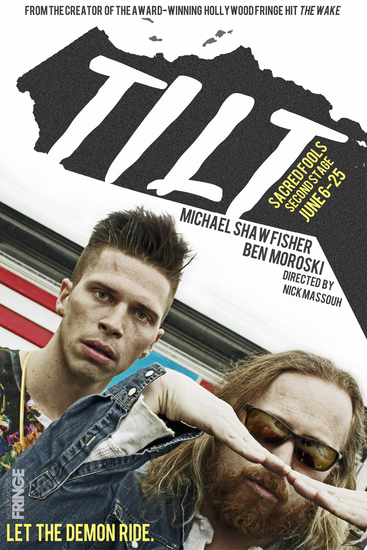 In complete silence, a crowbar tirelessly drags across the stage floor. The beholder of this weapon, with long hair, aviator sunglasses and scruffy beard looks like he’s been shot out of a Coen Brothers movie. But this is more real than any film, because he’s staring straight at me. Fade to black.

Tilt, the newest effort by Ben Moroski, had me on the edge of my seat from beginning to end. The tension was in the air; thick and palpable, like a needle drawing swampy blood. The story follows two men, played by Ben Moroski and Michael Shaw Fisher, lying low in an abandoned house after a scheme gone wrong. As a huge fan of dark comedies and crime-thrillers, this play was right up my alley. Moroski crafts dialogue and a situation similar to Mamet and McDonagh with a fresh blast of Americana. But unlike its cinematic comparisons, this felt a bit more raw and aggressive.

There is a synergy between Moroski and Fisher that is hard to find in other fringe productions. They fully commit to their respective characters and listen to each other the way that great actors do. Fisher, with his southern draw, manic eyes and unpredictability, shows his command of the stage.

Without going into detail for fear of spoiling a great “aha” moment, Tilt uses a very smart and interesting convention that I’ve never seen, or heard of being done before. Unfortunately, about three-quarters through the play, the device seems to go away, but eventually comes back for the conclusion providing a strong image that has stuck with me for days. I’m a fan.