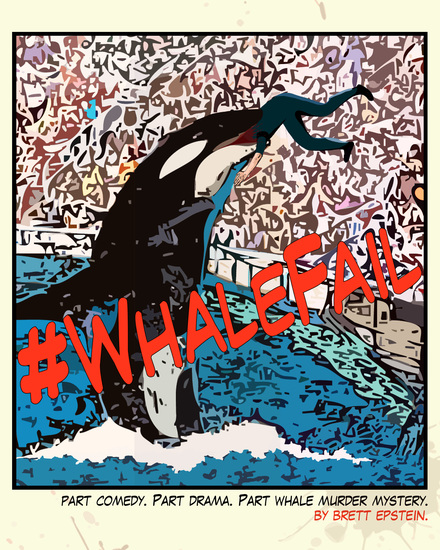 Brett Epstein’s tragicomedy, #WHALEFAIL, deconstructs the Kübler-Ross model of the five stages of grief while tackling the theme of ordinary man vs. corporate America. It also challenges the notion that we, as humans need to have extravagant goals in life. That we must try to change the world. Well, some people just want to fly under the radar. This is a story about those people.

The play revolves around an inciting incident involving a killer whale accidentally drowning a trainer during a demonstration at Ocean Planet, a Sea World-type amusement park. We follow Ralph, a socially awkward trainer for Ocean Planet who feels like he is to blame and Bridget, who is having a hard time accepting the death of her sister, Ivy. Together they try to come up with a plan to avenge Ivy’s death and make sure an accident like this doesn’t happen again. On the other side, Roger, a corporate big wig for Ocean Planet is trying to deal with the media and public backlash. Clayton Farris, even in a supporting role, shines as Roger. The rest of the cast holds their own but Farris seems to demand attention when onstage. He’s charming, well spoken and takes full advantage of each quip, beat and rhythm of each moment.

Epstein crafts characters that are common, but not generic. Quite frequently, I felt like I was watching some unpublished Neil Labute play. Scenes don’t feel rushed, they breathe and speech progresses through organically leading into the next plot point. It does gets a little wacky as the tone switches from drama to absurd to comedy to sappy and back to drama. Near the end it starts to sound a little preachy, harpooning on the same points that the documentary, Blackfish, made.

Overall, #WHALEFAIL is a solid show with excellent dialogue, performances and a strong theme.