Join the conversation at #QSWUR

The sixth edition of the QS World University Rankings by Subject, released today on TopUniversities.com, features a record-breaking 42 disciplines, making it the largest-ever ranking of its kind. Juilliard School has been ranked as the world’s best university for the study of Performing Arts, in what is the first ever global rankings for this subject.

The expert opinion of 76,798 academics and 44,426 employers informed the results, alongside the analysis of 28.5 million research papers and over 113 million citations sourced from the Scopus/Elsevier bibliometric database. This led to QS considering for inclusion 1,008 institutions offering Performing Arts-related courses, nominally ranking 974, before finally publishing the top 100.

This year’s first ever ranking features the world’s top 100 places to study Performing Arts, ranking those institutions that offer courses with a practical focus in at least one of Music, Drama, and Dance. The most-featured country in the ranking is the United States which takes 6 top-20 places, and 26 places overall. It is followed by the United Kingdom, which is home to 24 of the world’s top 100 places to study the subject. The University of Oxford and the Royal Academy of Music are also in the top five.

Harvard and the Massachusetts Institute of Technology (MIT) continue to take the lion’s share of top places in the overall rankings, leading in 24 subjects between them. Each takes twelve leading positions. 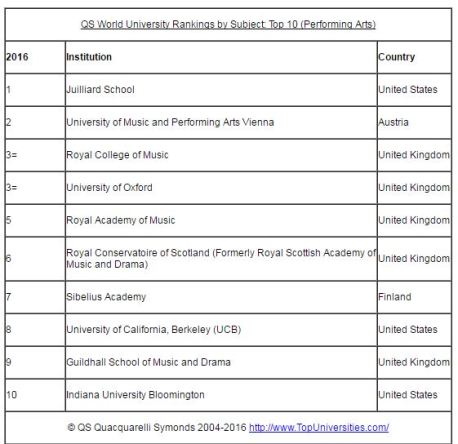 Ben Sowter, Head of the QS Intelligence Unit, said: “Though the US and UK remain dominant, our most inclusive rankings ever show that excellence can be found in an ever-increasing number of places. Nations like Austria, South Africa, Finland, Brazil, China, and Sweden can be found in the top ten of our tables. Our new top 100 for Performing Arts acknowledges academic excellence in 27 different countries, with institutions from 8 different countries in the top 20.”