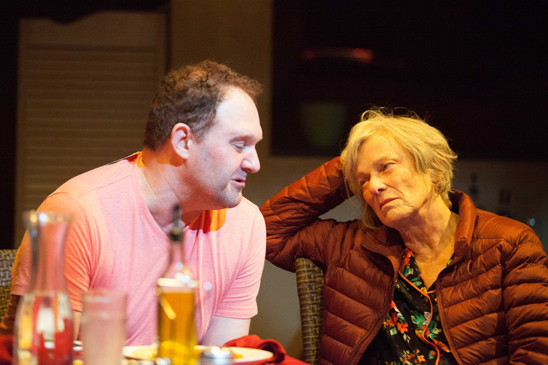 Life is a miserable undertaking in Samuel D. Hunter’s Pocatello, now getting its West Coast Premiere with Rogue Machine Theatre — inaugurating their new space at The MET Theatre — under the direction of John Perrin Flynn.

A presumed Olive Garden in Pocatello, Idaho, is where we meet our players, chomping on salad and carbs in the notorious Italian restaurant. Pocatello is dying. Ma and Pa shops are being overtaken by chains and franchises, jobs are temporal, fleeting, and nearly everyone hates their lives. Those who manage to leave still hate their lives. It’s like a plot of a horror film, with breadsticks.

The leading player is manager Eddie (Matthew Elkins) who harbors a secret: the restaurant’s closing and everyone’s losing their jobs. It’s in this knowing that he tries to outwit fate by launching “Famiglia Week” to bring in workers’ families and rack up sales. In reality, however, it’s his last-ditch effort to connect with his own family before his life falls apart even further.

Pocatello is about connection and loneliness in an increasingly homogenizing landscape. Alcoholism, drugs and failing relationships are rampant; misery and cynicism abound. It’s here Pocatello weakens its impact. In what could have been a more balanced, realistic exploration of “quiet desperation,” Pocatello crosses over into melodrama, creating a world so lopsided in despair it defies probability. Certainly many people happily inhabit Pocatello, but those characters don’t visit this Olive Garden. Maybe they’re next door at Denny’s. 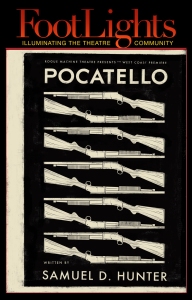 Laughs, fortunately, are elicited throughout, acting as a nice rosé to wash down a hearty feast of salty-teared dishes. The jokes are effective and brighten the piece beautifully. They also undoubtedly resonate with anyone who’s ever lived in their own “Pocatello,” or left it in search of greener pastures.

Matthew Elkins is a delight in the role of Eddie. His towering height makes for a “gentle giant” when subtle sensitivity is needed, and a force with whom to be reckoned when his attempts at connection require grander gestures. Rob Nagle as Eddie’s brother matches this largeness with boiling-over emotions, Pocatello and all it encompasses being a “hot stove” memory he’d rather keep at a distance. Jen Pollono and Trevor Peterson bring a quirk and callousness to the unfulfilled lives of fellow waiters, while Tracie Lockwood as a tormented wife and mother does mostly excellent work — though her extra splashes of pathos adds to the melodrama. Eden Brolin is delicious as a young, brooding humanitarian, her cold exterior exemplifying a stranger in a strange land. And Anne Gee Byrd is a powerhouse as Eddie’s mom, her abrasiveness serving as salt, not balm, to her son’s wounds, challenging the notion that “mother knows best.”

Stephanie Kerley Schwartz’s recreation of an Olive Garden in all its quaint, generic glory is spot-on, down to burnt reds, mustard yellows and decorative grapes and wine bottles aligning the walls. Bethany Tucker’s props add to the recognizable charm.

At its heart, Pocatello is one man’s quest for home; the human, relationship-oriented nature of that word being the primary, more successful exploration. The secondary, competing parallel is his concern that his beloved city is losing its identity. It’s Eddie’s relationship to this sense of “home” that feels a bit tagged-on — the emotional relevance he places on it never feels as truthful as his need for family and human connection. Regardless, Pocatello is a rich and admirable effort of finding meaning in an ever-changing world.

There is no intermission.