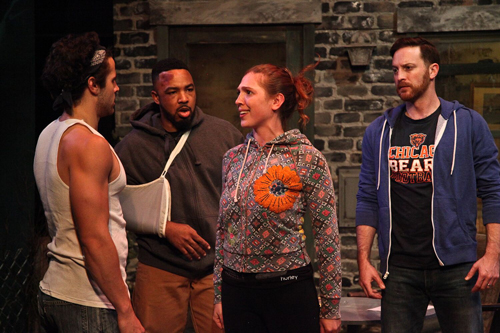 When well-off white couple Czar and April move into the crime-ridden neighborhood of Garfield Park on Chicago’s West Side, eyebrows (and stakes) are raised by their predominantly black neighbors. An early scene depicting this meeting is one of the play’s best — the clash of race and class played out through stares and uncomfortable silences.

With property taxes on the rise, poorer black families who’ve long called Garfield Park home are now being forced out by $5-latte-sipping white folk. Instead of using gentrification as the springboard to a richly-developed story, however, Broken Fences plays more as a simplistic PSA explaining what gentrification is and how it operates, often through expository dialogue.

Brazen “spoken word” monologues on the theme of “Invisibility” inserted throughout the show make for a puzzling choice. While these stand-alone moments bring insight into the main characters’ back stories, they don’t add to the plot, nor do they appear the logical choice of how less “poetic” characters would choose to express themselves.

That being said, performances are commendable across the board. Donna Simone Johnson reaches emotional depths in her portrayal of D, a hardworking, yet struggling black woman whose lifelong search for a place to call home has her defiant in the prospect of losing her recently acquired dwelling. Bruce A. Lemon Jr. plays her man Hoody with confidence and vulnerability, while his street smart brother Marz comes to life through the showman bravado of James Holloway. Coronado Romero and Mia Fraboni as the incoming white couple play well on the tension of their characters’ unaligned motivations for moving to Garfield Park over a more predictable suburbia. And Kris Frost brings a Steve Carell humor to the role of Spence, the “I don’t mean to sound like a stereotypical white guy even though I pretty much am one”-opining white friend. Indeed, Spence and other supporting roles are written as one-dimensional stereotypes with dialogue playing for jokes over truth, yet actors manage to make the most of their given material.

High marks go to Broken Fences’ design team, particularly John Iacovelli whose evocative set depicts a rundown home being mirrored by that of the comparably “rolling in it” couple just rolling in. Derrick McDaniel makes great use of lighting, particularly of projected graffiti.  And Joseph “Sloe” Slawinski’s sound design creates an urban ambience through street noise and hip hop.

Race relations and class discord certainly make for enticing subject matter. Coupled with committed, competent actors and gorgeous design, a dynamic evening of theater is possible. Unfortunately, a “messagy” tone and underdeveloped story prevent Broken Fences from breaking through to its full potential.

race, The Road Theatre on Magnolia