Music Obsession and All That Jazz in ‘Miravel’ at Sacred Fools 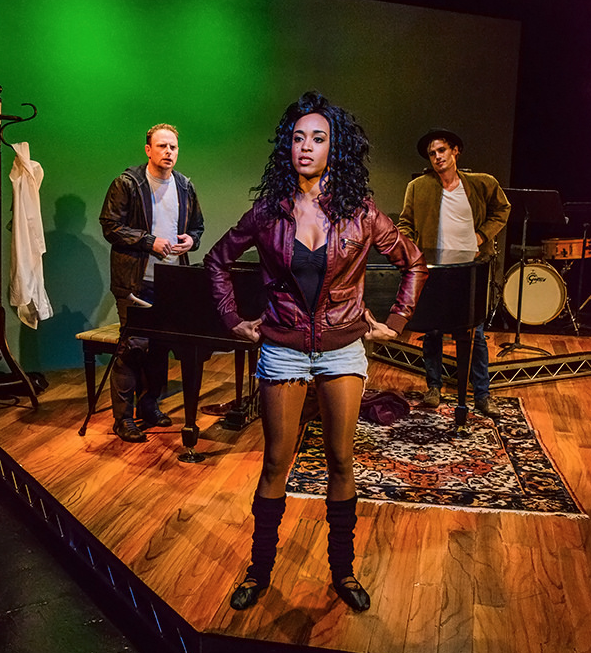 We immersed in the sensuality of sound, feeling what they felt, the players, the singers, the music makers. Those were the glorious unbridled moments.

For its second world premiere this season Sacred Fools goes back to the beginning so to speak with a deeply twisted love story in Miravel written and and starred in by Louis and Keely writer Jake Broder, a Cyrano-esque melodrama of three people addicted to the music.

Alphonso Bloch (Jake Broder) is a reclusive jazz composer who falls in love with Miravel (Devereau Chumrau), but so does bad boy singer Henry Brooks (Will Bradley). One has dedicated himself to Miravel as muse. The other obsessed with her as lover.  As the two men woo her, each respectively wrestles with his own greatest obstacle in the search for a deeper connection to music and love – himself.

An oversimplified, show-and-tell script, there is admittedly not enough for any of the actors to do, emphasizing a very long first act lingering to the point.

So much in this play is driven by the lead character Miravel whose innocently, alluring, barn burner qualities steer both men to push themselves so far inside their own desires and darknesses that it warrants a driving lead with some serious chops to take on the simplicity, connect with the multi-faceted, emotional complications and revolve this drama to a quixotic end.

What we get instead, is a struggle for chemistry by all three actors creating occasionally awkward interludes of dialog in between the actual music which is the shining star of this play but alas, fleeting at best.

Devereau Chumrau is a strong actress. She just doesn’t quite have the heat for this role and either plays or has been directed to play Miravel elegantly but stiff, inhibited as much by her unmovable wardrobe as her slightly clumsy choreography.

Will Bradley as Henry Brooks, however, delivers a top dollar performance, thoroughly reminiscent of rat pack swank and fluid Sinatra style singing that makes you wanna ‘blow your top’ in delight.

Miravel could do with some letting go. It needs to breathe so it can let the audience in a bit more, rather than keep them at a just beyond touchable reach. It needs more character.  It needs more ‘jazz’.  With that, the ride will be so much more satisfying.  Overall, though, it’s not a show to be missed. There are some incredibly gorgeous moments when we get them.  And the band is pretty darn phenomenal.

Photos by Jessica Sherman. Photo (above): Jake Broder, Devereau Chumrau and Will Bradley in Miravel.