Not Enough Social Impact in “Rent” at La Mirada 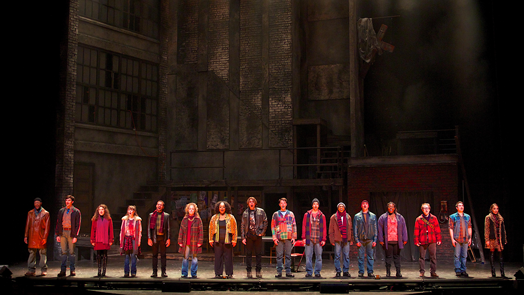 The East Village bohemians who took Broadway by storm nearly twenty years ago have returned to the stage in the Tony Award-winning Rent now getting a large-scale production at La Mirada Theatre for the Performing Arts. With book, music and lyrics by Jonathan Larson, this ground-breaking, mostly sung-through musical reimagines Puccini’s La Bohème as a late 20th century rock opera. Telling the story of starving artists, disease-plagued lovers and utopian-dreamers struggling to survive an AIDS-ravaged New York City, Rent made theater alive and relevant for young audiences with its cutting-edge sound, pop culture references and sexually-provocative subject matter in 1996.

Therein lies the problems of this 2015 staging.

Directed by Richard Israel for McCoy Rigby Entertainment, this attempted recreation of the original Broadway production lacks the social relevance and impact it once had. While themes of Puccini’s century-old opera are arguably timeless, Larson’s references to Doc Martens, Spike Lee, pagers and Newt Gingrich are not. More importantly, with growing acceptance of LGBT people, medical advancements in HIV/AIDS, nationwide marriage equality and RuPaul’s Drag Race in its seventh season, a lot has changed since Rent shocked audiences with same-sex love stories and introduced a dying-of-AIDS drag queen as a central character. Without a completely new directorial vision or a “time capsule” approach reminding audiences of the intense homophobia and body-destroying, community-decimating impact of AIDS at that time (things too self-evident to be needed in the original staging), Rent as a simple recreation of a bygone era comes across as dated. Uninspired casting and costuming replicas (Julia Flores and Thomas G. Marquez, respectively) further emphasize this point by referencing the too-old-to-be-current, too-young-to-be-nostalgic original Broadway production. Anthony Rapp, for example, gets his look-alike in Mark Whitten as a red-headed, nerdy-cute Jewish filmmaker Mark Cohen. Drag queen Angel Schunard’s (Lawrence Cummings) signature “Mrs. Claus” attire also makes its appearance. These safe choices play less as endearing tributes and more as silly Woodstock ’99 attempts of reliving the past, preventing many actors from making roles their own and depriving audiences of welcome inventiveness.

One notable exception is Emily Goglia’s take on the bisexual flirt Maureen Johnson. Her endearingly silly stamp on the performance art protest piece Over the Moon allows us a chance to collectively laugh at our past. Likewise, her sexual chemistry with Amber Mercomes as her uptight-yet-adoring girlfriend Joanne Jefferson in Take Me or Leave Me is equally impressive, each powerhouse out-belting the other in this passionate lovers’ quarrel.

On a not-so-compatible note, singer-songwriter Roger Davis (Devin Archer) and stripper Mimi Marquez (Cassie Simone) lack the charged intensity these HIV-positive, baggage-bringing lovers require. Archer’s fiery fight with roommate Mark in the second act shows he’s capable of emotional depth, yet when it comes to the show’s leading romantic story arc he appears uncommitted. His attempted rocker vocal styling is also constrained at times, though otherwise it effectively soars. Simone, on the other hand, has Ariana Grande-esque, pretty-girl looks and fantastic vocals, but her performance, however, is void of the desperate messiness needed of the strung-out junkie whose “no day but today” mantra has her living dangerously close to the edge.

Beautiful scenic design by Stephen Gifford is magnificently massive, towering the stage with an abandoned, industrial loft. While upper levels could be utilized more for performances, negative space on the building’s exterior is filled with Jonathan Infante’s richly layered video projections which document “real life” throughout the show, though occasional “live” camera shots don’t sync with onstage action. Sound design by Josh Bessom and musical direction by John Glaudini give group numbers the fullness they need, though individual performances could benefit from added amplification or richer instrumentation to create a more in-your-face rock concert feel.

Standout numbers Will I? and Seasons of Love (with gorgeous solos by Alyssa M. Simmons and John Pinto, Jr.) have actors break the fourth wall and sing directly to the audience (as is customary), reminding us of the power of Larson’s gorgeous score and pure human connection.

While Rent remains a transformative game-changer in the annals of musical theater, if this production proves anything it’s that the time for its reinvention or applied-contextualization is now. Until then, dust off your two-disc Original Broadway Cast Recording and
“Viva la vie bohème!”