Shakespeare’s Last Night Out at Three Clubs on Vine 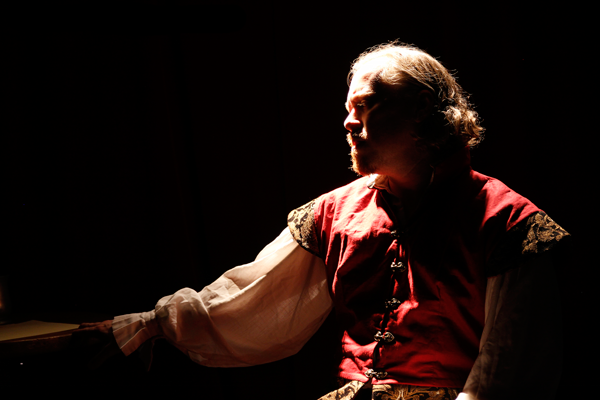 “Thou must, in this pregnant hour, with haste and wit, and whilst thou hast advantage, get thee to London (or at least to a bigger venue)!  Else content thyself with churlish critics and render bootless thy wordly strength. Dispatch!”

If ever there has been an intimate rendering of the bard, Michael Shaw Fisher’s (Orgasmico Theatre Company) original solo performance, Shakespeare’s Last Night Out is a definitive, musical, interactive discourse, from the mouth of the worlds most renowned playwright in his final hours.

Legend has it that Shakespeare expired from a fever after a night of drinking. In Shakespeare’s Last Night Out the Bard of Avon defends his authorship, details personal, life-shaping family milestones, recounts unknown events and characters, and periscopes his bawdy career beginning from early days as a young boy at school fascinated with story and mask.

Sonneting glove making references inside his father’s shop into some of the most beautiful lines of text in his most famous plays, he exalts ignoble hilarity, the importance and pure joy of his art, and kinships and crossed paths with other acclaimed players during one of history’s most celebrated and dangerous centuries of poetry and stage. It is indeed a bawdy journey of song, serenade and deeply heartfelt regret as well as fierce retrospective.

Michael Shaw Fisher’s delivery is more than mere characterization, he is a near apotheosis of our beloved Will yet “most plain”.  Fisher gives us a highly moving, distinctive portrait of a dreamer/actor/writer who was simply a man.

Photo (above) by David Haverty: Michael Shaw Fisher as William Shakespeare in Shakespeare’s Last Night Out.