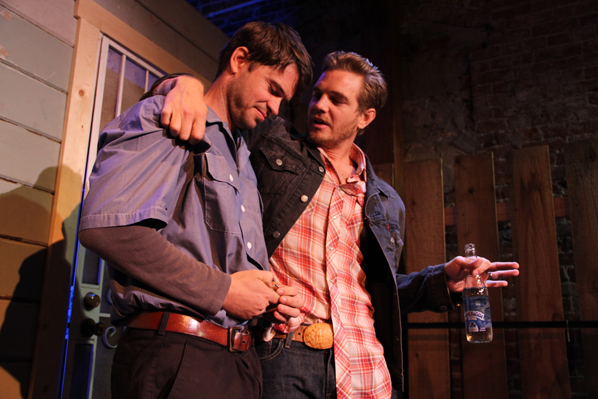 “Brother and sister together we’ll make it through.” — “Everybody’s Free (To Feel Good)” by Rozalla

Brothers and sisters are put to the test in Sibling Rivalry, a pair of slice-of-life one-acts directed by Troy Ruptash that examine whether love overcomes when kinship is kindled or if stoking a fire with too much truth can send familial relationships up in flames.

First off we meet similarly-named brothers Roy (Taylor Handley at performance reviewed; Mercer Boffey plays alternate) and Ray (Wes McGee) in James McLure’s Lone Star. The year is 1972 and Vietnam veteran Roy is two years back from service and about two hours from blacking out. Sitting in a lot behind a dingy bar in Maynard, Texas, a drunken Roy wishes upon a star for the life he remembers — a life free from mental atrocities, where simple comforts like his wife, his beloved 1959 pink Thunderbird convertible and a few swigs of Lone Star beer are all he needs for solace. Out walks Ray, his younger autistic brother, to check up on him and his current state of intoxication. After a few snaps Ray observes “War made you mean.” “I was always mean,” Roy replies.

They discuss life and its pleasures like cars and girls, interact with the sexually-frustrated, local simpleton Cletis (a deliciously comedic Joe Massingill), then venture off into the minefield of Roy’s mind when he coerces his hypersensitive brother to help him re-enact his brutal experiences in battle, a scene whose horrors only enhance its laugh-out-loud humor until Ray says “I don’t like playing Vietnam, Roy” and brings us back to reality. It’s this dynamic between the demon-haunted James Dean cowboy Roy (a troubled, charming Taylor Handley) and his compassionate, on-the-spectrum, puppy dog little brother Ray (a heartbreaking, hilarious, you-just-wanna-hug-him standout Wes McGee) that makes this one-act well-worth seeing. And while plot definitely takes the backseat to tortured-soul character study, secrets do explode in this profound and moving gem Lone Star.

Next up, the girls.

Ginger (Kim Hamilton) and Rosemary (Kirsta Peterson) are two 1990s sisters who meet in the Rhode Island diner Ginger is about to close for good to make room in her life for more — a “more” that is soon to be revealed (brace yourself, sister) in Edward Allen Baker’s Rosemary with Ginger. It all starts when Ginger calls in her sister to help brainstorm and write an essay about the life of their mother, an essay that could win the matriarch a $500 gift certificate. The question is what about their mom is deserving of said prize, particularly when their childhood recollections reveal an abusive past that may not land well with the Shopper’s World judges. Meanwhile, their own romantic relationships have gone sour and Rose’s return to alcohol causes more-than-slight disturbances in the ties that bind her.

The weaker of the two one-acts, Rosemary with Ginger plays a bit too heavy on melodrama — to the point it even curiously calls itself out on it — and leaves some loose ends untied. That being said, the performances contained in this piece are quite spectacular to behold and more than balance any imperfections in the plot. Kim Hamilton shines with vulnerability and might as Ginger, a woman who must find the strength amidst her current marital strife to tower her beloved, more popular sister who’s simply gone too far off the wagon. Kirsta Peterson plays the abrasive powerhouse that is Rose with a tear-dripping finesse required of a woman whose cracked veneer reveals the hollow and damaged interior we’d expect from a human pinball in life’s unfair machine.

Set design by Timothy Pacaldo is quite effective and pronounced in this intimate space, transforming beautifully between backwoods bar exterior to quaint, greasy spoon diner. Erica Lawrence’s lighting and sound design (with additional sound and music design by Troy Ruptash) is equally serviceable, with slow visual fades and fully played-out atmospheric tracks that give characters room to breath in their often claustrophobic little worlds. Costumes, though uncredited, are also on-point. Ashley Clark is stage manager. Sandra Kuker is publicist. Producer is KKMWJ Productions in association with The Aquila Morong Studio.

The unique bonds between siblings rival many others, most notably for their longevity and history. The friction that often comes with their intimacy, however, can smooth even the roughest of edges when rubbed successfully. Sibling Rivalry is a satisfying exploration of these relationships ever-so-romanticized in the famous Bobby Scott and Bob Russell song lyrics “He ain’t heavy, he’s my brother” and give testament to the enduring power of family.

Photo (above): Taylor Handley and Wes McGee in Lone Star at the Lounge Theatre