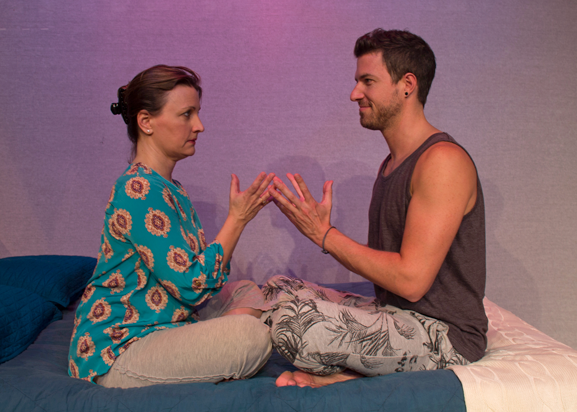 Lovers, Lotus poses and labias are explored in this lofty new musical whose premise might be considered far-fetched if it weren’t based on a true story (and even then…)

A 52-year-old widowed sexologist walks into a yoga studio (stop me if you’ve heard this one) and is immediately overwhelmed and intrigued with the unfamiliarity of it all — people dressed in white, chanting faces beaming light. A Kundalini virgin, Beverly (Kim Reed) soon finds herself in Venus Kriyas with a handsome, 20-years-her-junior yogi named Cody (Casey Hayden) with whom she shares a rapturous, cosmic encounter (Sat Nam) that begs her wondering if these two have some sort of past life history. (Wouldn’t be my first thought, but hey, not bad for a beginner!) They agree to meet again, but this meeting is held suspect when Beverly’s longtime friend Cynthia (Stephanie Andersen) doubts his heterosexuality after scrolling through the Facebook photos of him Beverly so enthusiastically displays. Not one to back down to speculated orientation, Beverly soon meets Cody in his apartment, questions his possible fondness for the fellas, and hears the sad-but-true confirmation — he’s gay. She goes in for a kiss (”labels” be damned!) to which he recoils (lady kisses are gross!), then offers to “honor” him with a Tantric blowjob instead (naturally!), and soon more than his Kundalini is rising (Go with it, it’s a true story!) Beverly spends the night, Cody is wonderstruck, and weeks later our heroine is singing about the joys of doing his laundry (Laundry), because, hey, it’s a musical!

As this below-the-lips cosmic affair takes flight, best friend Cynthia is dealing with her own sexless marriage to always-distant Noah (Tod Macofsky) by feeding her three a.m. emotional aches with rich and delicious chocolate cakes (Ambrosia). Meanwhile, Beverly’s roommate Jenny (Katherine Washington) is feeling sexually-blocked with her transgender boyfriend Riley (Shen Heckel), this being the lesbian’s first relationship with a male-identifying partner. On the horizon a lovelorn Gabriel (Espiridion Magana) is puppy-love deep with the now MILF-diving Cody.

Unfortunately, this isn’t a comedy.

Sex, Love, & Yoga is based on the true life tale of creative sexologist and co-producer Dr. Stephanie Torres, with book, music and lyrics by director Kate Sullivan Gibbens. While billed as “A Provocative New Musical” with sex-positive and body-loving themes, there is interestingly no nudity (except for a shirtless Cody) and all sexual situations are simulated under covers — an understandable choice for a musical, of course, but a noticeable one for a show that so vocally advocates eradicating shame of our bodies and what we do with them.

While sexuality and gender are increasingly being viewed as fluid concepts, the explanations of why a self-described gay man would embark on a sexual relationship with an older woman are frustratingly lacking — “past life lovers” and his admiration for the “divine feminine” probably won’t satisfy most audiences. At the same time, Sex, Love, & Yoga plays less like a musical and more like endless therapy sessions between Beverly and the remaining characters. We never really get to the heart of anyone’s problems, but circle around them ad nauseam until the expected happy ending attempts to finger it all out and tie up loose ends with “sacred spot massages,” suspect smiles and self-love.

Performances are quite solid across the board — actors doing their best to bring an improbable story with hard-to-swallow dialogue to life.

Kate Sullivan Gibbens’ music, however, offers more than one gem, thanks in part to many soulful vocalists under the guidance of musical director Kate Marley. The melodies are often quite beautiful, as in the case of ballads Sat Nam and The Rest of Me. Lyrics, however, fall flat under the weight of clunky self-help realizations and silly subject matters (Safe and Laundry respectively), but shine when tackling issues like gender roles in the bold and sassy Good Girls Don’t. Additional song credits go to Snatam Kaur. Anthony Starble gets props for arrangements.

Sexual fluidity, body issues, relationships, trauma, healing, gender roles and identity are certainly important if challenging subject matters. Theater can tackle them (even in musicals), but Sex, Love, & Yoga takes on too many and forgoes entertainment and story for clinical, esoteric introspection. While based on a true story, its credibility is lost with two-dimensional characters and unlikely scenarios that need more outside perspectives and fleshed-out narratives to ring true.

There’s certainly a story in here, it just needs found — like an elusive G-spot.

For Mature Audiences Only.