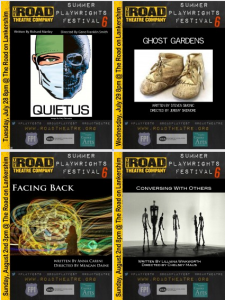 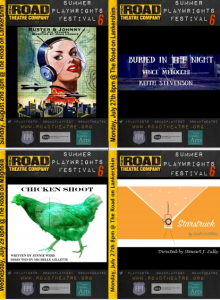 THE SUMMER PLAYWRIGHTS FESTIVAL (SPF6) will open on Sunday July 26 at 8pm and run through Sunday August 2 at the Historic Lankershim Arts Center, 5108 Lankershim Blvd. in North Hollywood, CA.

Additional performances will be held Wednesday July 29 and Thursday July 30 at The Road on Magnolia in the NoHo Senior Arts Colony located at 10747 Magnolia Blvd North Hollywood. 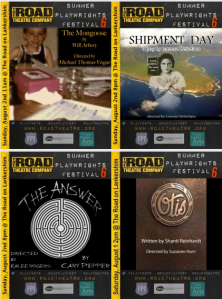 One popular feature of the festival last summer was the live music that was featured during each reading reception in our gallery space. This year’s festival will feature the bands and musicians Mleo, Stage 11, Engine of Survival, End of Ever, Theo’s Dream, and Irish band sensation, Whiskey Sunday. The reception will be held in our backyard patio-Bettina’s Cantina-and will feature wines from Paso Robles Wineries and delicious appetizers and desserts.

View a copy of the Festival Schedule:  HERE

Paden Fallis (award winning The Play About the Coach),

Kat Ramsburg (Playwright of the Year The Bridge Initiative: Women in Arizona Theatre), 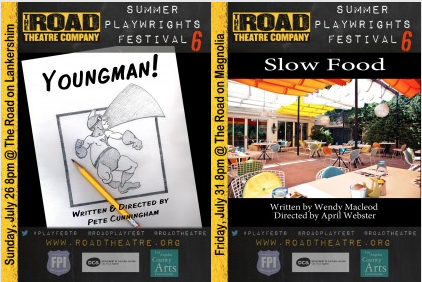 Road Company members are also highlighted with plays by:  Anna Carini, Deana Barone (Peabody Award winner). Bettina Zacar, Lisa Kenner, Shanti Reinhardt. This year’s festival features noted directors such as, Taylor Nichols (Barcelona,NAACP Award All My Sons, LA Drama Critics Circle Award), April Webster (Emmy Award Winner-3 nominations, 4 time CSA winner. 11 nominations ), Keith Stevenson (Ovation Award, Out There on Fried Meat Ridge Road) and many Road company members and members of the Los Angeles theater community. This year’s Collegiate Playwriting Competition winner is Will Arbery (Northwestern University), and his play, The Mongoose which will be performed Sunday August 2 at 11am. Most of the playwrights whose work is featured will be attending and will participate in a post-show discussion with the audience and cast. 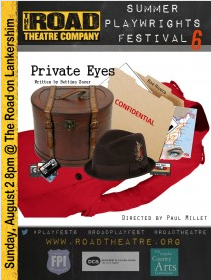 Guest actor include Butch Klein (Grace and Frankie, 24) and Matthew Glave (The Wedding Singer, Girlfriend’s Guide to Divorce, Argo) and many other guest actors. Artistic Directors Taylor Gilbert and Sam Anderson on the

importance of the festival to the theatre, “The Road’s Summer Playwrights Festival offers a wonderfully compressed period of new works and voices from established and emerging playwrights brought to life by the Road ensemble and guest artists who interact in lively discussions with our audiences, different live bands each evening, great food and drink and a tremendous sense of community between artists and theatregoers. An unforgettable event.”