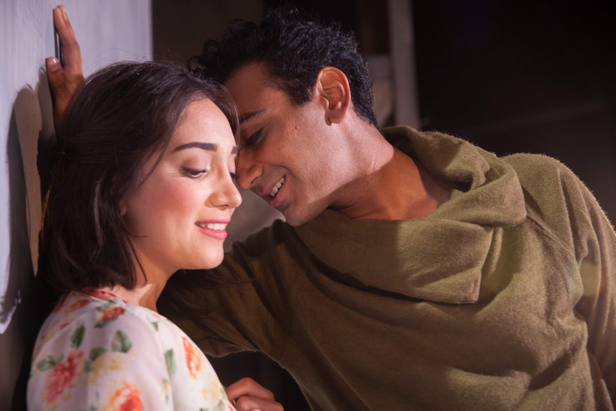 by Tracey Paleo Gia On The Move

@IndyShakes returns to Griffith Park this Summer with Shakespeare’s most famous play about teenage folly as it’s season opener.

The emotional knee-jerk characteristics of tween/teens are thoroughly captured in this production by a not yet 13, overly cutesy Juliet and a capricious Romeo falling in and out of infatuation with Rosalind and then soundly in love with the girl of his dreams.

It’s a solidly modern theme that never loses its resonance or it’s impact especially with younger people today driving culture into a very adult landscape, drowning out the motif of children being babies, in its wake.  That’s not exactly the case here, but the power of extreme youthful passion craving experience in its fullest value is never more displayed so well as in Romeo and Juliet.

Once past the somewhat manufactured physicality of actress Erika Soto’s (Juliet) naivety, who displays a more adult change-up in the second act, there really is a quite brilliantly executed performance.  Ms.  Soto captures on one hand an exuberant, refreshingly high-spirited pre-teen and on the other, a singularly desperate, very young girl trapped in a situation with no options, no empathy from her parents, and no social recourse whatsoever.  Suicide is a clear choice.  For Juliet, it is the one way she knows how to absolutely decide her own fate.

Independent Shakespeare has taken pains to master a raucous Romeo and Juliet focusing much more into the quicksilver aspect of the teenage love story and the bawdiness of Shakespeare’s original writing.  Everything about the presentation is pointedly interactive, jolly, “loose,” laying so much less heavily on Shakespeare’s age-old theme of parental control, but nevertheless making the heady and lightening speed ending absolutely potent.

In fact, it is noticeable that some of the darkest aspects of this play – the death of Mercutio, the fatal duel with Tybalt, the severity of the consequences of Romeo and Juliet’s secret marriage – are almost skipped in favor of  what seems like a “never-ending party.” Here we have a thoroughly libertine Mercutio powerfully executed by Andre Martin and a surprisingly un-frumpy, street-wise, quick-thinking nurse played by Bernadette Sullivan almost entirely coopting focus.  Actor Nikhil Pai is a perfectly appealing Romeo who matches Juliet.  And there is truly an immersive quality about this production.

In the end though, the message for Juliet remains the same: that Love is most definitely NOT unconditional.  She has “lain with her sworn enemy”.  There will be no forgiveness for the truth and no way out of a life she can no longer accept through the “forced” new open eyes of an adult.  In Romeo’s case, death is as definitive a choice, and that of a young boy so immersed in the conviction of love without reason.  He really believes his life is over when he hears of Juliet’s untimely demise.  Romeo and Juliet’s only real support system is Friar Lawrence who (even though only) by accident, fails the couple, when it counts.

The violence of Romeo and Juliet’s actions is not shocking at all.  Their course has been set for them, mostly by the haste and bullying with which Juliet’s parents arrange her “womanhood”.  They are well-meaning but typically narcissistic adults more concerned about appearance and legacy than their child’s “actual” happiness.  Sound modern?  It should.  It’s a behavior still happening in every culture ore’ the world difficult to render it excusable for the “times,” be it cross-racial divides, religious and cultural differences that don’t assimilate, buying and selling child brides…and grooms, keeping kids on lock down for more than safety reasons, the gamut is endless – just watch the news.  And that is what makes this story ultimately so tragic.  We may have moved the needle in the direction of facilitating awesome human beings rather than ordering our children into a kind of submissive adulthood.  But plenty over centuries hasn’t really changed.

Independent Shakespeare’s production of Romeo and Juliet under the direction of Melissa Chalsma is an overwhelming success with it’s completely fresh interactive presentation.  Here we have absolute beauty, intelligent comedy and painful tragedy unequivocally balanced.

One of the most gorgeous and seriously fun aspects of this production is the original fairytale-punk, rock score designed and performed by David Melville & Ashley Nguyen with William Elsman & Jack Lancaster.  Undeniably the highlight of the evening.

Highly recommended.  It’s a bit bawdy at times for young children, but no one was complaining.