The 2015 Hollywood Fringe Festival ended last night after crowning this year’s award winners at the annual Award Ceremony and Closing Night Party. Over 650 people attended the event. The Freak Awards are community-voted by Fringe participants and attendees. Winners included:

See the full list of award winners, including sponsored awards and extensions. 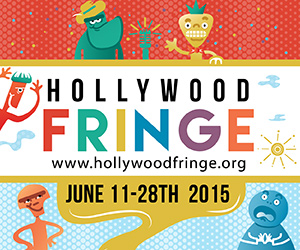 The sixth Annual Hollywood Fringe was a huge success according to festival organizers, with record-breaking online ticket sales and attendance. Official numbers and year-to-year comparisons will be released in the coming weeks after the settlement is complete.

The Hollywood Fringe Festival is an annual, open-access, community-derived event celebrating freedom of expression and collaboration in the performing arts community.  Each June during the Hollywood Fringe, the arts infiltrate the Hollywood neighborhood: Fully equipped theaters, parks, clubs, churches, restaurants, and other unexpected places host hundreds of productions by local, national, and international arts companies and independent performers.

Participation in the Hollywood Fringe is completely open and uncensored. This free-for-all approach underlines the festival’s mission to be a platform for artists without the barrier of a curative body. By opening the gates to anyone with a vision, the festival is able to exhibit the most diverse and cutting-edge points-of-view the world has to offer. Additionally, by creating an environment where artists must self-produce their work, the Fringe motivates its participants to cultivate a spirit of entrepreneurialism in the arts.