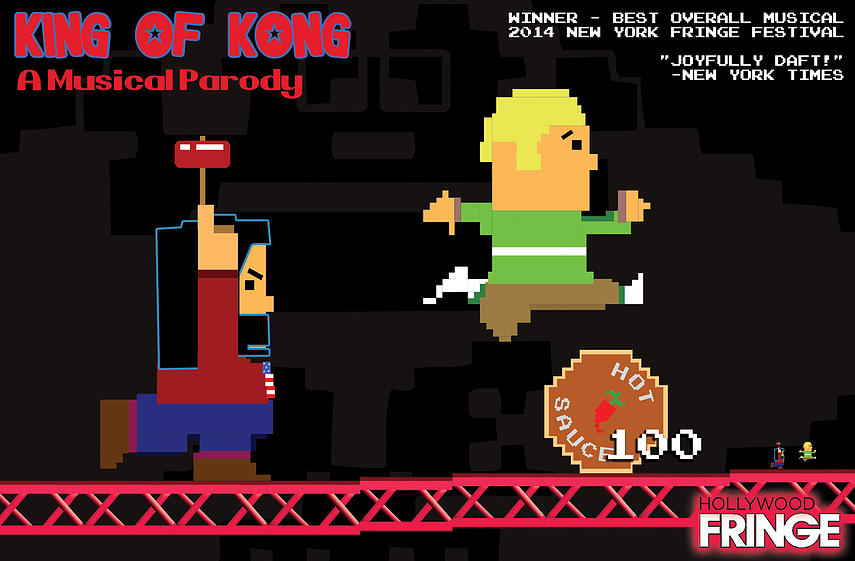 “Kong Could Be the King Of Musicals”

I had first heard about King of Kong: A Musical Parody when it was still being developed at Sacred Fools during Serial Killers.  If you don’t know Serial Killers, it’s quite the unique format.  A late night show where plays compete in 10 minute stints for a chance to move onto the following week with the audience entirely deciding the fate of each piece. It’s a whole lot of fun and every night is completely different.

If you’re not familiar with the original source material, King of Kong: A Fistful of Quarters, then do yourself a favor and go watch the film. It’s probably still on Netflix. The cult documentary tracks the progress of gamer Steve Wiebe as he attempts to enter the Guinness Book of World Records with the high score of the retro arcade game, Donkey Kong. The antagonist and total doofus of a man is Billy Mitchell, who currently holds the high score for DK, aka “The King” of Kong.

Lauren Van Kurin (writer, actor, all around awesome person) does take quite a few liberties with the original plot and this was a smart choice.

Lauren Van Kurin (The Poe Show) and Brendan Hunt (Absolutely Filthy, The Poe Show) are a dynamite team. The commitment and energy from these two is just unstoppable. The singing isn’t exactly Broadway caliber, but they are fine singers. Kurin & Hunt race on and off the stage as different characters, and the expertly crafted set up to hard punches make this show feel like a sitcom in the best way possible.

At times King of Kong becomes a little too much for them to take on all by themselves. There are so many different wig, costume and personality changes that happen in lighting fast time, but honestly… it only adds to the laughter.

King Of Kong: A Musical Parody is easily accessible, fantastic and very fringe.  It incidentally was named Winner for the Best Overall Musical for the New York Fringe 2014.