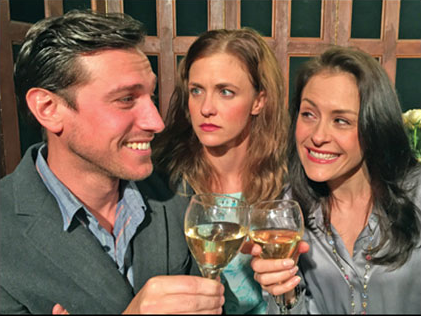 The following review is a re-print from the Tolucan Times

Review by Tracey Paleo, Gia On The Move

It’s a very safe kind of love that doesn’t challenge you in the least, but one where there is comfort and stability, even at the expense of boredom and predictability and where outdated child ownership ethics prevail in the guise of honor and duty. But isn’t that what 90% of the people out there want? Otherwise, less of them would be choosing it.

It doesn’t get much deeper than that in award winning playwright Jerry Mayer’s 1986 comedy revival, 29th anniversary production, directed by Chris DeCarlo, of Almost Perfect, with a good Jewish boy “George Bailey” kind of marriage trajectory and a near fairytale ending, almost close to reality.

Poor Gershwin aficionado Buddy Apple keeps getting his dream of being a writer put off, first by a practical father, then by a practical wife and a practical career as a contractor, until the woman of his fantasy sells him some advertising and he finally falls in love. It’s a fast moving play “by the numbers” but well executed by truly wonderful and well-cast actors. No surprises, lots of expected decisions and a little bit of old school, a la Jackie Mason, Jew versus Gentile humor. Everyone gets to go home happy knowing that all is right in the world. Values have been preserved, marriages saved, family units intact, hopes and dreams restored if not fully realized – yet.

Almost Perfect is a fun, easy audience pleaser without any demands on theatre goers, pointed to an older generation but no doubt paralleling current ethical Millennial morays.