Taking place at various venues in Beverly Hills (UTA Screening Room), Downtown Los Angeles (MOCA, historic Palace Theatre, REDCAT), Hollywood (historic Egyptian Theatre), Santa Monica (Aero Theatre), and Westwood (Crest Theater, UCLA) from April 30 – May 5, 2015, this multi-disciplinary festival promises to offer something for everyone and will showcase many forms of dance including modern, post modern, world, tap, dance theater, ballet, hip-hop and practically all dance that has been captured on film in a way that is of quality andessential value.

Over 30 films will be screened over the course of the Festival connecting diverse cultures and environments through the exploration of dance.

DCW aspires to awaken and infuse the public mainstream with a desire for critical creative programming. The vision of DCW is to present the visual language of dance on screen in a way that stretches the imagination and changes the way we think about dance.

A selection of top international short films and a live dance performance from Jacob Jonas The Company: 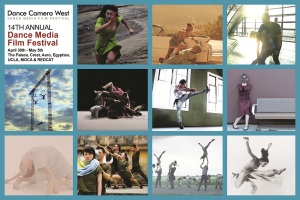 Sunday, May 3 (day)
The Museum of Contemporary Art, Downtown LA

Illumination, education and examination, both contemporarily and historically, of the relationship between Animation and Dance through discussion and screenings.