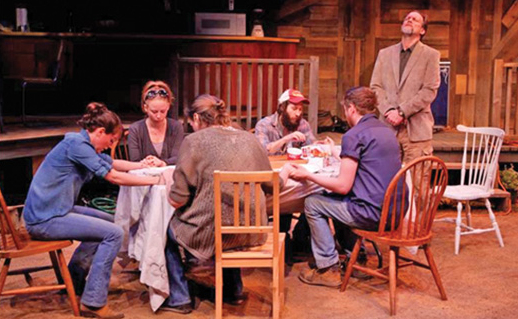 The following review is a re-print from the Tolucan Times:

Family Ties Bind Ever So Tightly in Thieves

I got nailed with a dead woman’s cremated ashes…

Yep! It’s true. In a moment of white-heat emotional fury, actress Sarah Shaefer sent gray projectiles of her deceased mother en masse hurling in my direction which hit my hair, dress and chair. Although the man sitting in front of me took the best part of the explosion.

And that was just one tiny full frontal assault in the all-out-mayhem maintained for the entire performance of Thieves, a world premiere, now playing at the Monroe Forum Theatre at El Portal, in North Hollywood.

Notwithstanding the shocking hilarity of the moment, there’s not a lot to figure out here. There is so much rage in this script and zero forgiveness for a completely irredeemable family whose spirit died long before their matriarch.

Thieves is a gritty portrait of an estranged Texas family in upheaval, totally exposed, and being forced to confront wounds, truths, hatreds and brutalities, past and present, now that the mother of the family has died. None of it is easy. All of it is grotesquely displayed in every imaginable form of hysteria. Everything they did to one another respectively in the past has left permanent scars that can never be erased. Will they ultimately plunder what’s left of the past, move on from it or be swallowed up whole by it?

It’s a thoroughly torrid affair. Be prepared to stay on edge. You will not be allowed to miss a single moment of this intense drama. Nor will you want to.