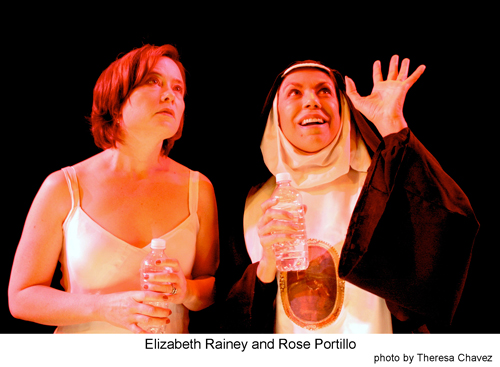 ‘Three things cannot be long hidden: the sun, the moon, and the truth.’   ~Buddha

For its commemorative 25th anniversary Properties of Silence, produced by About…Productions in residence at The Carrie Hamilton Theatre at The Pasadena Playhouse is currently being paired in revival with a Convergence of Women’s Voices Salon Series of poetry readings, special performances, panels and discussions.

Written by Theresa Chavez, Rose Portillo and Alan Pulner and directed by Chavez, this short play melds two seemingly separate yet parallel stories together which ultimately discuss the struggle for self-expression.

It is a simply breathtaking piece!

The third part of a trilogy that deals with the inner voice as a possible source of personal spiritual and political truth, the play takes place in a multi-layered dreamscape highlighting not just its gorgeous, inspired presentation, but the very real importance of Sor Juana Inés de la Cruz, a nun of New Spain (Mexico) who in the 17th century was an acclaimed, self-taught playwright, poetess, scientist and philosopher.

Sor Juana focused on highlighting and revering the beauty and necessity of earthly things, people, sciences and ideas as the real blessing of God rather than falling in line strictly behind Church dogma which was suffocating and unenlightening especially for women who were brutally repressed.  She became known in her lifetime as The Tenth Muse and the Phoenix of the Americas. During her life, she also acquired what is considered to be the largest collection of scientific and musical instruments in the Americas and possessed a substantial library.  Before being silenced by the Church, she was commissioned by the vice-regal court of New Spain, residing in Mexico City, to write verse and plays, a number of which were published in Europe.

Sor Juana was silenced by the Church for being a woman but really, for being a woman of extraordinary intelligence and reason, attributes  that were forbidden by the Church itself for women to possess.  Sor Juana wrote during a time when the subjegation of women was absolute. Intelligence shown by any woman was considered and dealt with as a disobedience and even though she was completely devoted to her faith, much of Sor Juana’s writings are said to have been destroyed as part of her penance wherein she writes (or was told to write), “I, the worst of all women…”

Nevertheless, a few of her works managed to live on creating a legacy that could not be denied. Even the facts surrounding whether or not she actually signed the penance papers or that she completely conformed to her silence remain loosely in debate. She is considered the first feminist writer and a Latin American treasure.  Properties of Silence is inspired by her most significant poem, Primero Sueño (First Dream).

Properties of Silence is as brilliant as Sor Juana’s works themselves.  It is hands down one of the most evocative, intelligent, accessible writings imbued with considerable simplicity and empathy for all women, for all, period, feminist or not.

Set in Phoenix, Arizona and told all in poetic line and imaginary dream where the players cross time and space to meet, exchange ideas and confess their fears, the piece shifts lightly from past to present through metaphor and reality until both become one.  Barbara (Elizabeth Rainey) and Tom (Kevin Sifuentes) come to grips with their troubled marriage.  Sor Juana (portrayed by Rose Portillo) confronts her own imminent silence by the Catholic Church who is forcing her to silence her pen and her scientific inquiries.

Original prints created by artists from the first Maestra Atelier at Self Help Graphics & Art in tribute to Sor Juana will be displayed in The Carrie Hamilton Theatre lobby.