“Whatever you end up doing, love it.”

To say that the newly restored version of the Oscar winning film Cinema Paradiso which played last night as part of the AFI Festival 2014 and showed at the Egyptian Theatre Hollywood, CA, was a tear-jerker, is the biggest understatement of all time.  My two-hour crying fit, runny nose, black mascara and blue eyeliner stained cheek is a testament to how much better this film is today than its first run and how much emotional impact it still carries.

Attended by a passionately enthusiastic crowd devoted to this presentation of cinematic wonderment in all of its glory, actor Danny DeVito opened the forum with a moving introduction to Italian cinema, life growing up as an Italian kid, what movies meant to him and then finally gave us a beloved by all in attendance director, Giuseppe Tornatore.

I’ll admit it’s been a long time since viewing this 26-year-old film.  As I sat in the theatre my eyes took it all in “for the first time”.  It occurred to me as I watched, just how much more beautiful, vibrant and most of all meaningful Paradiso truly is.  Perhaps with age comes appreciation or perspective or a desire to relive the past. Cinema Paradiso is absolutely life worth reliving and retelling over and again.  Witnessing it all, the comedy, the wisdom, the heroic acts, the loves, the losses and of course the wrenching scene of the actual cinema being dynamited…all of the elders standing around crying, is probably one of the most, amongst so many presented here, painfully, gorgeous, soul-ripping moments on-screen.

Tornatore wanted to tell a story and give to the world the heart and passion and love of Italian cinema. He did that and more.  He gave us the people.  Is it any surprise that filmgoers still flock to this movie?  I say no. What a triumph for Mr. Tornatore to create such a masterpiece and what a gift he has given us, as evocative and exquisite as Alfredo’s cuttings of passionate kisses pieced together in a single reel — his loving and final message to Salvatore. And for his own personal finale of the evening, the entire house in a massive standing ovation, turned inward to surround Tornatore with a resounding GRAZIE! BRAVO!

The worldwide preview of the digitally restored version of Cinema Paradiso directed by Giuseppe Tornatore, produced by Franco Castaldi and supported by Dolce & Gabbana, in association with Luce Cinecittà and Cineteca di Bologna, took place last night, November 10th at the Egyptian Theatre in Los Angeles. This is the first tribute in 25 years to Cinema Paradiso, which won the Grand Jury Award at the 1989 Cannes Film Festival, and the Best Foreign Film Oscar at the Academy Awards the following year.

The screening was part of the project Cinema’s Legacy by the AFI Film Festival 2014 presented by Audi. The restoration took six months and was executed by Immagine Ritrovata di Bologna, personally overseen by Giuseppe Tornatore and cinematographer Blasco Giurato. 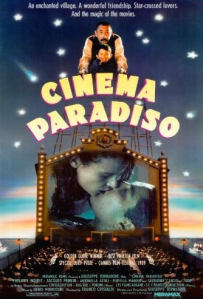 “People most often stop me on the street to talk about Nuovo Cinema Paradiso. I receive letters, messages, articles, and invitations to attend screenings. Students focus on the film for their essays and dissertations. I constantly hear expressions of affection out of respect for this film, which was only released for an altogether brief period. That fever you experience when a film begins its life in theaters has not yet subsided.  The wonderful adventure to Hollywood to receive the Oscar for Best Foreign Language Film, the award at the Cannes Film Festival, the Golden Globe, the BAFTA, all the other awards received and the international festivals at which the film was presented, are beautiful sensations I feel I have freshly experienced. The year-long promotion done around the world is a journey from which I have just returned, the suitcases yet to be unpacked. In short, they are all sensations of today that only the future will turn into memories. And yet I find myself called suddenly by my friends at Istituto Luce Cinecittà, L’Immagine Ritrovata, Cineteca di Bologna, and Dolce & Gabbana to tell me that they have decided to restore Cinema Paradiso. What is happening? The figures don’t add up. For goodness sake, thank you all for your attention, commitment, and wonderful initiative. But if the film has just been released, why restore it? I’m really surprised and bewildered, as if I’m in a dream or a special effect. Yet I must note that 25 years have passed … Twenty-five? What a joke. It is absolutely impossible. I suppose it is a miscalculation. It is a film present constantly in my daily life. Journalists never cease to question me about the reasons and the contours of this adventurous experience. In whatever country an audience attends, I always feel a throbbing emotion, so for me it is completely unnatural to believe that all those seasons have passed. It seems to me to be an arithmetic error, a passage of time poorly recorded, or at least hazardously so. Furthermore, the memory of working on the movie is fresh in my mind as if I had made it only a few months ago. So many friends and collaborators shared this adventure with me, and we speak of it whenever we meet, although many have abandoned us in the meantime.  I also happen to return periodically to the places where I imagined and realized the film, because it is not uncommon that someone comes to shoot interviews or documentaries about Nuovo Cinema Paradiso, and they ask me for news, testimonials, and information.  I experience it, therefore, as a work that essentially has never ended.  So to find myself today sitting in a digital console in a room that is not entirely dark, reviewing the rolls of film and realizing from the wrinkles on the images and the wounds of the sound that so much time has actually passed, throws me into a dimension that is truly disconcerting. Yes, there is no other explanation, it must be just a special effect.” ~Giuseppe Tornatore, Civita di Bagnoregio, October 23, 2014