‘Hollywood Party’ at the Hudson Mainstage in Los Angeles, CA

It was a vigorous performance. But timing is everything and timing is exactly what they didn’t have.

Aspiring actors and long time friends, Alberto Samaniego & Rodrigo Altamirano are invited (so they think) to a spectacular Hollywood party for the premiere of American pioneer (mostly silent) film actor, director, producer, Fred Niblo’s latest movie. At the party, Alberto and Rodrigo discover that two guests are there to murder a VIP Hollywood celebrity. While trying to unmask the culprits, they have to deal with lights, cameras, press, maddening movie stars, jewel thieves, cross dressers and a snooping butler. 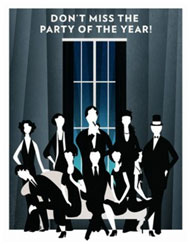 The opening of Hollywood Party was an exciting prospect.  Hollywood’s most fabulous murder mystery set in the 1920s, parodying legendary film superstars like, Greta Garbo, Joan Crawford, John Gilbert and Enid Bennett, was utterly, visually divine.  From the mirrored stools, to the leather cushions, beaded pillows, jet oversized chess pieces and other Deco remnants perfectly placed around the room, the set dressing, quite marvelously accoutred the evening to come which commenced rather calmly but eventually picked up some speed. The costuming by Octavio Carlin, multiple award-winning fashion designer to the stars, was delicious.

I can only guess that farce is not the strongest attribute of the cast as an ensemble. Right from the beginning, the lines often awkwardly halted, paused and dragged and actors seemed to have trouble keeping the split second pace, needed to make this comedy work, while keeping in heavy character.

The shining exception throughout, however, was Calli Ryals, a well rehearsed sketch comedy actress, who notably arrived as several distinctly different personalities, like a firecracker and with all of the chutzpah, and more, necessary for each diva in-house. Danny Menendez also pops in at the tail end as a very recognizable W.C. Fields.

It’s more likely, however, the production suffered from less energetic and solid direction, required for this type of burlesque as well as some of the key actors not quite understanding how to deliver it.  I kept longing for the likes of Nathan Lane or Philip Bosco to arrive with the sort of nuance, savvy and superior vaudevillian “muck up” that could actually take this show to an over-the-top zaniness.  The story, well-written as it is, almost gets lost in the middle but for Rodrigo, played by actor Kelly Brighton, who crisply sums up the play-by-play and keeps the audience up to speed.

On the glittering upside, cast members thoroughly and very successful do immerse themselves into the various characters and do camp it up quite well throwing down many highly entertaining moments. If they can marry some better pacing with all of the schtick in the coming performances, it’ll largely be a hit.  A fabulous time, however, can be had with this show.  Still giving it a thumbs up to the all around dedication by the cast and risk taken to produce this timing-difficult piece.

One thought on “‘Hollywood Party’ at the Hudson Mainstage in Los Angeles, CA”