Los Angeles Women’s Theatre Festival Presents “Of Culture, Of Self on September 5th 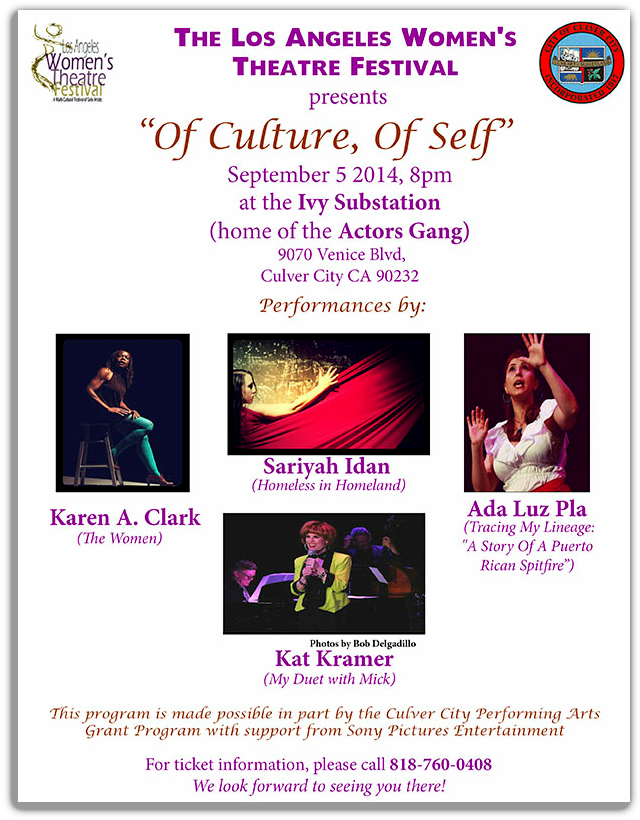 The theme of the evening will be Of Culture, Of Self, featuring three of LAWTF’s favorite performers, as well as one artiste new to the Festival. Included are:

Karen A. Clark:
In a spoken word excerpt from The Women, Karen A. Clark reflects on the powerful women in her family through music, poetry and storytelling. She recounts the ritual of baking bread at family reunions, an activity that brought everyone together. In particular, she pays homage to her loving mother, who added a “wow” factor to her life.

Sariyah Idan:
Homeless in Homeland has a documentary hip-hop theatre aesthetic and is based on Sariyah’s journey that  took her to Israel and Palestine. It combines poetry, dance, and characters met. Idan conveys in this excerpt a young Jewish-American woman’s struggle to understand her identity and the meaning of home through the lens of the Israeli-Palestinian conflict.

Ada Luz Pla:
Tracing My Lineage: A Story of a Puerto Rican Spitfire pays homage to the many women who raised Pla in Puerto Rico and later in the South Bronx projects where 15 of her family members shared a small three-bedroom apartment. In the lively excerpted piece, Pla brings to life some of the amazing women in her family.

Kat Kramer:
My Duet with Mick is an original one-person-musical-solo-show that follows Kramer’s journey down “Rolling Stones Road” to meet the great and powerful “Sir Mick Of Jagger.” Along the way, in this excerpt, Kat meets some unique characters, and makes an important discovery about herself.

Of Culture, Of Self marks the LAWTF’s fourth-year program for residents of Culver City. This program is made possible in part by the City of Culver City Performing Arts Grants Program with support from Sony Pictures Entertainment.