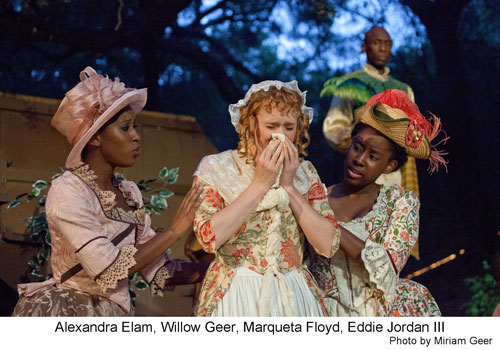 “All’s well that ends well”… and that’s a good thing for one of Shakespeare’s more notoriously problematic and confus-ed plays currently in production at Will Geer’s Theatricum Botanicum, as part of its celebration of the Bard’s 450th birthday and an All-Shakespeare Repertory Season.

If Love is a battlefield then this one is filled with mines for handsome, naïve, Bertram who just can’t figure out enough ways to avoid marriage and commitment.  He is convinced, like any young man, (and not just by his own mind) that life as a soldier in the King’s army is the adventure he craves.

Helena on the other hand is determined to have what she wants and gets it by all means, whether the object of her amore is willing or not, justified by the unadulterated fact that, “she loves.”

Though originally classified as one of Shakespeare’s comedies, All’s Well That Ends Well is considered by most critics difficult to be categorized as either a tragedy or comedy.  The title taken from the old proverb, which means that problems do not matter as long as the outcome is good, leaves one slightly aghast in this mire of manipulative mayhem.

All’s Well That Ends Well is a bittersweet story about class differences.  Theatricum’s production attempts to bring it into the 21st Century showcasing Helena as a great female role model who crosses class lines to follow her heart.

It’s a hard line to cross, though.

Low born Helena is merely the daughter of a renowned physician taken into Bertram’s house after the death of her father.  Living in the same household she falls in an awkward love with Bertram, who is a Count and well above her station. Despite all of her qualities, her beauty, her eligibility in every other way, including the blessing of Bertram’s mother, (the Countess of Rousillon), he leaves for court to make a brilliant life and an understandable ‘future’ marriage to someone more befitting his rank and wealth.

In the most egregious of ploys, Helena travels to Paris and heals the King of France from an incurable illness with the help of one of her father’s remedies.  She is then given the right to marry any man she loves. Bertram however bitterly rejects Helena, and but only for the command of the King, forced to go through with the ceremony, subsequently leaves Helena un-bedded, alone and sent back to a home to which he will never return.  From here she must use her wits, her wiles and whatever friends she can muster in order to eventually seduce her own husband into impregnating her – the only way he says he will ever truly be her husband.

Helena although struggling from an honest place, in an honest course, still defies modernity in execution.  Embodied by the lovely and talented Willow Geer as a softer, outplayed-at-almost-every-turn, yet determined woman in love, Helena is compelled by the fact that she is a female living by the rules of a socially strict culture, to shape her fortune in what can easily come across as deceit.  And frankly, what she does is deceitful. But there are no other means.

The biggest complication with trying to make the story modern is that, were it not for a King’s ultimatum, Helena would most likely never have won an opportunity at Bertram’s heart apart from sisterly love, and most definitely would not have been made his wife.  It’s still an old-fashioned trap portraying Helena more as a go-to girl rather than the heroine that girls today are looking to for answers about love.

That all being said, the production itself is quite marvelous.  Earnestine Phillips (Countess of Rousillon), Mark Lewis (Parolles) and Wayne Stribling Jr. (King of France),  assemble, sort out and pull along a partly green but jocular cast in a thoroughly enjoyable, well-executed romp under a moonlit, outdoor, Summer theatre sky.

Leading lady Willow Geer (Helena) is a well-honed, driving instrument; perceptive and intuitive in her delivery.

All’s Well That Ends Well, is by all means, a show worth seeing and a concept curious enough worth visiting.  No matter the complications or structure of the Bard’s script or the shortcomings of a the attempted reboot, there is hardly a disappointment to be found from first to last line, made more special by the gorgeous environment of the outdoor stage itself. All in all — a treat.

One thought on “All’s Well That Ends Well”