Sunday Extra: How Much Did That Beer Cost? 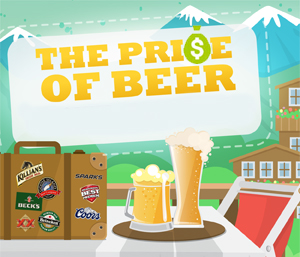 Do you know what’s the world’s cheapest beer? How about the most expensive?

Of all the Beer consuming countries in the world would you believe the United States isn’t the highest on the list for ‘hitting the bottle?’  In fact, we’re only #14 when it comes to drinking and practically don’t even rank when it comes to spending.  What gives?

Maybe it’s the price you’re paying. Beer can be dirt cheap in some corners of the planet. On the other hand, if you’re German, for instance, and part of the third heaviest beer drinkers in the world group, you’re probably shelling out $235 per year on alcohol. If you live in the Middle East, where it’s mostly banned, you are paying a lot more than that!

Check out this fun infographic sent to us by David Adelman at Finances Online that breaks it down: