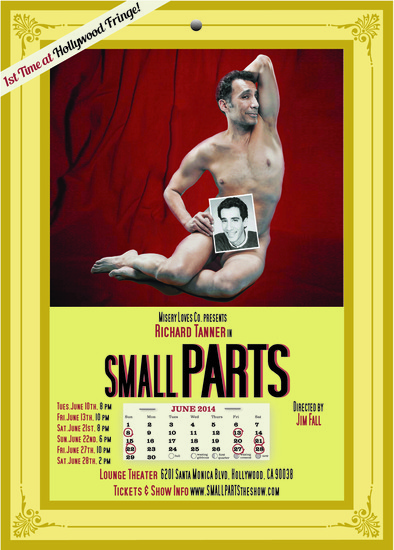 “I can’t get no satisfaction”…for a lifetime so far.

He has no right to complain about his life.  But we’re so glad he did.

Richard Tanner has an age old story aching to be told about the trials and tribulations of what it’s really like being an actor.

Imagine having one of the more recognizable faces on television, appearances on too many hit shows to even number, going head to head on camera with stars and celebs for some of the more memorable moments of taped drama, and yet nobody knows your name.

If you don’t think that living the life of a passionate artist isn’t all that tough, I dare you, go and try it.  But be prepared, because much like Richard your career will be measured in “small parts”.

Small Parts is a singularly heartwarming, comical and sometimes awful cautionary tale of a very young boy’s dreams pursued into adulthood at all costs especially his heart. From the moment he steps on his grammar school stage as George Washington, the Father of our country, and told, “you got it kid,” he is utterly taken by the vision of a wondrous future that only he can imagine.

It is completely relatable and spot on, a banner for the “we’ve been there and done that over and over again” theatrical community.

The saddest part is that he is not unique in his journey which is rank with excitement, hope and a lot of the time, debilitating depression.  You will not always be satisfied in your quest.  You will suffer. You will go hungry.  Your body will ache.  And so will your heart more than you will ever admit.  You will live in the extreme because you have no other choice. The dream is everything.  It’s only just around the corner.  You will have to bear the sharp thorns and nettles of an unforgiving business that will tear you apart inside and out for the desire of it. Your journey will never conclude and it may never be fulfilled. And yet, according to Richard, he wouldn’t change a thing.

Definitely one of the more fulfilling solo shows at Fringe.  Kind of a tear jerker. It unfortunately has no more performances. But you can keep up with Richard on the website of the show.