Fringe Up HFF14: The Werewolves of Hollywood Blvd – A Damnable Rock Musical 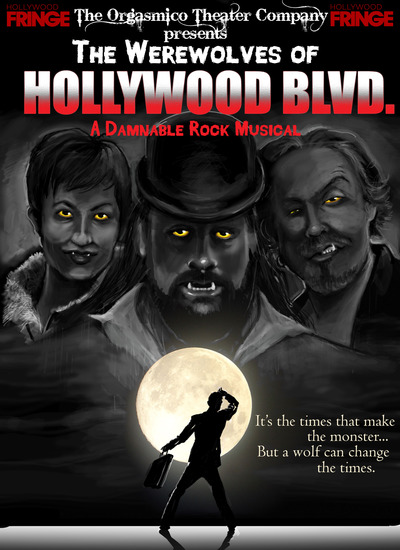 by Tracey Paleo, Gia On The Move.

It a was like one big run-on, un-euphonious sentence that was 90 minutes too long.

Normally one of the more funny and inventive groups at the annual Hollywood Fringe Festival, Orgasmico Theatre Company’s, The Werewolves of Hollywood Blvd: A Danmable Rock Musical, didn’t quite cut it with it’s new production.

From beginning to end, Werewolves was angry, angsty, frustrated and mostly confused about what it wanted to say.

It’s rather a violent script in some ways.  Although not bloody or gory there is plenty of hatred, psychosis, damning of religion, murder and distress, crammed down the audiences’ throat with nary a pause for a breath of enlightening air about why any of this is happening.  There are clues to be sure, but they are completely lost in this muddle of madness and mayhem, cheating, beating and revenge.

Lead character, Lawson Grace, a lit agent, is given a script about the history of werewolves which he initially blows off.  Werewolves don’t sell. But when he is fired from his company in a corporate takeover, he is suddenly in need of a hit to support his entrepreneurial career rescue start-up.  Skepticism turns into curiosity, then violence, then belief as he becomes caught up in the story and in his own personal transformation from man to animal.

Visitations from the ghosts of werewolves past (?) … jump out of the writing and lead him on until he is convinced he is a werewolf himself…but are they real or only in his mind?

The Werewolves of Hollywood Blvd: A Damnable Rock Musical tries much too hard to be a psycho-thriller and is unabashedly mediocre with half-baked, un-variegated songs, dismally unexciting choreography and a “post-it” ending.  Of course, with the company of players being mostly singers, they manage to pull off the musical score, although at times vocally indecipherable, but without meaning or impact, emotional or otherwise.  As a personal fan of this company’s work, it was a bitter disappointment. This show just doesn’t deliver.

If you dare, and werewolves are your unqualified thing or just can’t live without experiencing another quirky Fringe musical, then by all means, there are 4 shows left.  Be prepared for a long night.

4 thoughts on “Fringe Up HFF14: The Werewolves of Hollywood Blvd – A Damnable Rock Musical”