Gustavo Godoy and the Architecture of Movement 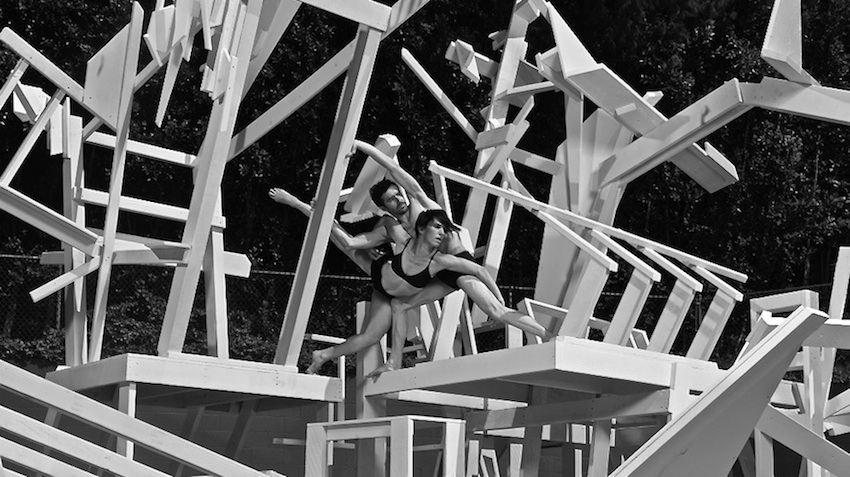 Stepping into a dancer’s arena is special.  Athletic and often quirky  there is no lack of adventure in the process of discovery.  On one particular occasion the unknown extended to more than just choreography. 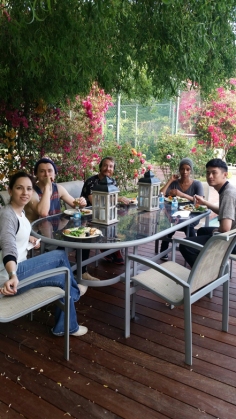 Several weeks ago marked the unveiling of a newly built stage designed and entirely constructed by local Los Angeles artist Gustavo Godoy who built a large-scale sculpture for the dance performance RESTRUCTURE.

The structure is a hightlight of the Dance Camera West Dance Media Festival  which took place this past weekend at the Music Center Plaza downtown LA and will end on June 13th..

How much weight could each platform hold? Which pieces would be deliberately pulled apart? Which spindly extensions, crevices and holes could the dancers maneuver through?

The process was drawn out at first barely inching along.  But slowly, gradually, bodies moved noticeably faster with more agility directed by Victor who encouraged the dancers to take more risks.  Not that they needed to be asked. In no time, the whole company went from crawling to swinging along. To witness this merging of movement and architectural art was no less thrilling and inspiring.

Artist Gustavo Godoy’s large-scale sculptural installations are site-responsive, informed by both the surrounding environment and the body’s potential relation to the work. Made of industrial materials such as plywood, plexiglas, and florescent lights, their dynamic constructions invite a physical experience– for one to climb, sit on, and even walk through.

Godoy’s sculpture at the plaza of the Music Center is acting as a structural armature, an object specifically purposed for dance movement, with built-in ramps and passageways that the dancers interact with and perform on.

Many of Godoy’s architectural sculptures are made largely with materials recycled from his other artworks. In concert with the RESTRUCTURE theme of this year’s DCW festival.

Choreographed by Victor Quijada, Co-Artistic Director of RUBBERBANDance Group and award winning choreographer/dancer. From the hip-hop clubs of his native Los Angeles to a performance career with internationally-acclaimed postmodern and ballet dance companies such as THARP!, Ballet Tech, and Les Grands Ballets Canadiens de Montréal.

He has created over 24 short and full-length pieces both within the company structure and as commissions, and has toured with his company across North America, and in Europe, Japan, and Mexico. His work eloquently re-imagines, deconstructs, and applies choreographic principles to hip-hop ideology, examining humanity through a unique fusion of aesthetics. His most recent film, Gravity of Center, won Best Experimental Short at the 2012 CFC Worldwide Short Film Festival and screened at DCW in 2012.

A co-commission by Dance Camera West and The Music Center.