Fringe Up HFF14: ’21st Century Marilyn’ at the Complex 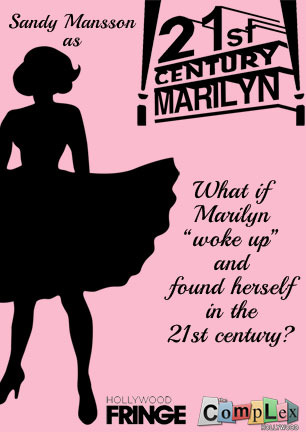 by Tracey Paleo, Gia On the Move

Older women in the 21st century are not allowed to be sexy or attractive. They are discarded and they are not worthy of love, simply because of their age.

By the finale, 21st Century Marilyn gets to the heart of the material.  Only problem is the rest of the show.

Marilyn Monroe goes into a deep Sleeping Beauty-like slumber while filming Something’s Got To Give and wakes up to a nightmare, the humiliating rat race of modern-day Hollywood where her film has been shelved, she’s out of work and no one, including Fox Studios or her theatrical agency, William Morris, recognizes her or knows her name.

She does get a quick save by a lone relic of her ‘past’, a booker by the name of Sid. From there she is paraded through an indignant series of obnoxious cattle calls, impatient auditions and screen tests, extra work, shocking crew lunch first-to-the-table protocol and being openly ordered by casting directors to “get in the back” because she’s too old to be in the front of the line.

In and of itself, the material although writing ‘light’ has a purposeful storyline, but it’s far too loosely tied to Marilyn as a character.

A 40 minutes long, one-woman show performed by Sandy Mansson, may be inspiring to the actress and occasionally entertaining, (Ms. Mansson sings a very sweet and flirty version of, I Wanna Be Loved By You which actually does attract a few men in the audience), but it’s not enough.

Ms. Mansson’s voice is barely perceptible, difficult to hear from the seats, without range and much of the performance, the lighting cues and scene changes are slow and awkward. The show feels like a run-on sentence.

The Lesson: Every woman needs a second career or you’ll be taken out like the trash.

There are nine more shows for Ms. Mansson to step up her game.  21st Century Marilyn could pack a whole lot more punch.  Especially for the women it represents.