Holding The Man at the Matrix Theatre Los Angeles 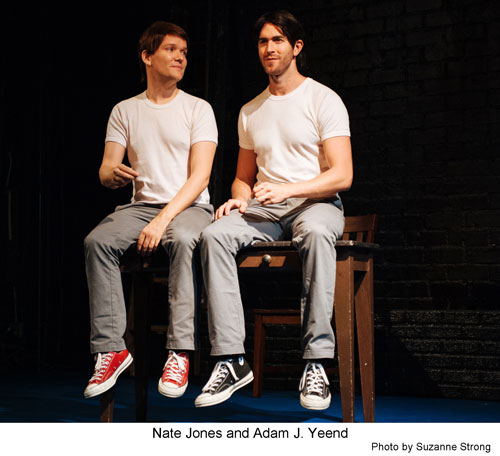 This past Saturday evening saw the Los Angeles opening of Holding the Man a stage adaptation by Tommy Murphy of the memoirs of deceased author and activist Timothy Conigrave, at the Matrix Theatre, Hollywood.

Directed by veteran Hollywood acting coach Larry Moss, Holding the Man is one of Australia’s most successful plays of all time and is presented by the newly formed Australian Theatre Company with an all Australian cast, who have recently taken up residence on the West Coast.

Billed as a love story, Holding the Man also puts a direct linear timeline to real-life contemporary history that has been difficult even up till now, to tell and assimilate. Beginning in the decadent 70’s, at an all-boys school in Melbourne, Holding the Man follows two young teenage boys who fall in love and who for fifteen years thereafter, face the consequences of being gay at a time when acceptance was very near impossible to have.

In some ways, one could say that Holding the Man is a story ‘by the numbers’. These boys deal with every possible obstacle: parents who try to separate them, peers who make fun of them, teachers who ‘out’ them, anger, discrimination, resentment, other gay men who take advantage of their naivety, distance, boredom, promiscuity, heartbreak, contracting the disease and eventually death.

Many of us have had people we’ve lost since the onslaught of HIV and AIDS and so the content won’t be new for some.  But what is exciting about this production, is how it is delivered and how thoroughly the story is told.

Highly theatrical and energetic, absurd, shocking, and occasionally bordering on camp, this play takes the audience on a bullet-train ride from start to finish – absolutely defiant in its pacing.  Although there is a lot to digest in this piece, Holding the Man is so beautifully simple and completely accessible. It bypasses prejudice and stigma, playing to the surface and yet subtly penetrating beneath it, to round the whole lives of both young men, without allowing the audience to get too caught up in any emotional dribble; which is not to say that there isn’t any emotion at all. Quite the contrary. It’s just that Holding the Man is not indulgent. It allows the audience to bear witness and at the same time, understand the humanity of the piece.  These boys are just ordinary boys -anywhere.  No more, no less. They are not particularly special.  They’re just normal. That is the tragedy.

At the finale whatever resentment one might have been feeling about the lack of excess, is resolved because there has been no concession to coddle and dote on the shock of the moments until the end.  Pity and other dis-attached sentiments fall by the wayside, leaving  the audience embraced, engaged and connected with everyone involved; most of all, settled with the breathtaking, painful reality faced by their friends and family, of which the audience is also an extension. We’ve been there with them, all the way.

There is the use of puppetry (designed by Alex “Jürgen” Ferguson) which on first look, seemed a bit extraneous. But the appearance of this particular device takes on a sort of psychologically, non-offensive, avatar-like neutrality and so it affords the audience a “way in” to the devastating imagery of the disease, without it being a sickening distraction. In other words, ultimately it works.

And there is quite a bit of Australian ‘speak’ to comprehend.  But the words and phrases seem to have been toned down from the natural language to make them easier to understand.

The character work is marvelous.  The actors accomplish style and personality changes with the simplest of devices, wigs and physical behaviors inside a sparse set design; attesting to the power and effectiveness of  minimal stage craft. Lead actor and narrator Nate Jones is the hands-down fearless wonder-boy of this production who earnestly embodies Conigrave’s spirit, along with heartbreaking co-star Adam J. Yeend. Both are uniquely captivating, genuine and appealing.  Actors Cameron Daddo, Luke O’Sullivan, Adrienne Smith and Roxane Wilson, are seamless as they transition over multiple roles throughout the performance.

One interesting note: The play’s title refers to a transgression that incurs a penalty in Australian rules football.

Holding The Man is as fresh a take on a story we are all familiar with as if it were told for the very first time. It is a poignant  journey that dexterously guides the audience to a mournful end.  In between, it is glorious, and gorgeous and triumphant.