Gia On The Move got her early holiday gift — an exclusive copy of Heyward Howkins gorgeous new album, Be Frank Furness.   Full of depth and soul, equal parts turmoil and glittering melodies, Be Frank Furness idles somewhere comfortably between the sound of Andrew Bird and Dent May.

Within the opening moments of the new album, the cheerful guitar instantly elevates the release into a blissful state, but it soon becomes apparent that an overarching feeling of unrest and discord, evident on his previous release, still plagues Howkins.  This is an album worth spending time on. 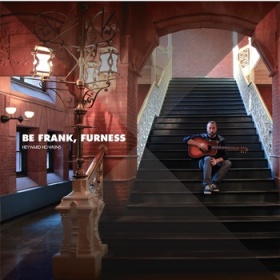 Singer/songwriter, Heyward Howkins premiered his next single, “Praline Country,” on Diffuser.fm in anticipation for the release of his sophomore album. The track is light, bright, and reflective – a warm, upbeat song that is handsome and poetic with deeper meaning. The forthcoming LP, Be Frank, Furness which was just released on November 5th. – is a perfectly crafted collection of colourful and bright melodies with surprisingly dark liner notes of heartbreak and anguish.

You can read more about Heyward at his website.