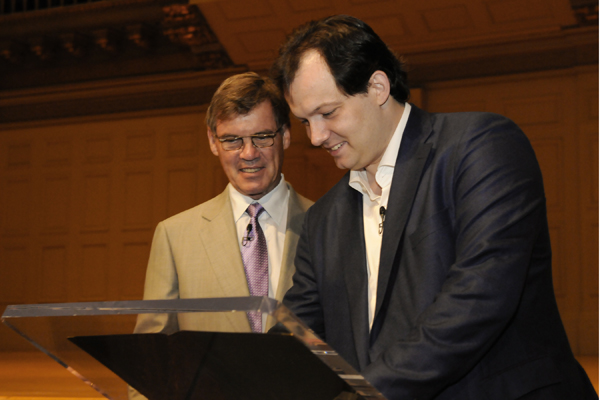 Harking back to the days when I was a kid listening to Arthur Fiedler conduct 4th of July fireworks symphonies in the former West End of Boston, below Beacon Hill and on the Charles River, it’s my personal pleasure to post this breaking news today.

Congrats to Andris Nelsons, the newly appointed Boston Symphony Orchestra Music Director, who formally signed his contract today, June 25th, 2013, as the 15th Music Director of the BSO in front of an audience at Symphony Hall including media, BSO subscribers, leadership, and musicians from the BSO, Tanglewood Festival Chorus, and Boston Youth Symphony Orchestras.

In celebration of the city’s great music history and the new appointment, a proclamation by the City of Boston declared Tuesday, June 25, 2013 “Andris Nelsons Day” at Faneuil Hall at 5 p.m.

Andris Nelsons will throw the first pitch at the Boston Red Sox game at Fenway Park tonight after leading a brass ensemble of BSO and Pops musicians in pre-game fanfare and will conduct the Boston Symphony Orchestra for the first time since his appointment at Tanglewood on Saturday, July 27, leading the Verdi Requiem.

One thought on “Boston Symphony Orchestra Welcomes A New Conductor”