#HFF13: The Time Machine Musical at The Hollywood Fringe Festival 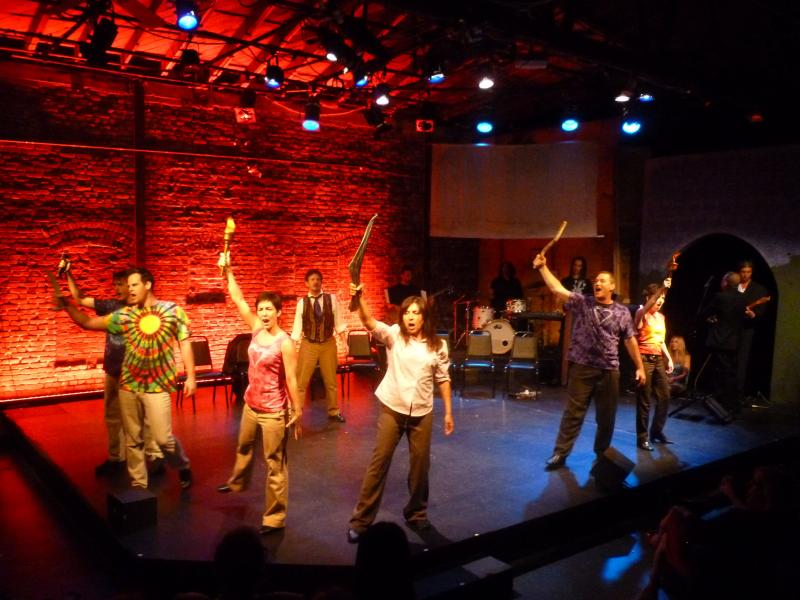 This might be one of the harder reviews I’m about to write for the 2013 Hollywood Fringe.

I read the description of this show and after watching a teaser video of the music, with great and sincere enthusiasm I requested a comp.

One of more curious offerings, as a festival contender, a musical based upon the classic novel written by H.G. Wells, had the attention of a fair amount of regulars, i.e. actors, producers, writers, and other show participants.  It’s a great idea sounding potentially “just the thing” for a Fringe showcase with big stage bound dreams.  Somehow, though, it didn’t cut it.

When I say, hard to review, I really mean this.  Walking out of the theatre, post preview, catching glimpses of the glowing, excited faces of the key players involved, who got this production to stage, made me sink.  It’s no small thing to orchestrate a full two hour production and cram it into a 1 hour, for all intensive purposes, investor demo.  But it didn’t capture my imagination.  And bottom line, I just didn’t understand it.

I admit that it’s been a while since I’ve read the novel, but I’ve seen the various movie versions, I’ve even recently been secretly working on a colleague’s book that used the early cover imagery of Wells’ Time Machine novel, as an inspiration.  In other words, this story has actually been at the forefront of my mind for a while.  And, it is exactly the story line of the Time Machine Musical that didn’t quite make it here.  There were some fun numbers, a standard costume change, an effective, show-opener, funny gag, however, the cast was uneven vocally, the set up scene to scene more and more non-sensical, the Eloi a bit too unisex, the Morlock not very depraved or subterranean and I couldn’t figure out why the Time Traveller had to carry his drinking flask with him — for the entire journey.  I’m not even sure what his actual inspiration was to go back to save the Eloi, least of all Weena with whom, there seemed to be barely a connection, in this version.

The show is supposed to explore themes of class struggle, addiction, greed, teenage angst and hopelessness which it does loosely touch upon.  But runaway technology, man playing God, love, betrayal and redemption…I’d have to say, it never got to that point.  What was most effectively presented was the idea of popular apathy.  And perhaps as I read somewhere in a cliff notes teaching version of this story, H.G. Wells’ intention was to warn us not to get too comfortable – that just because things are pretty good now, we shouldn’t expect them to remain that way forever. It’s not monsters that are going to get us – it’s time.  In this case, what “gets” The Time Machine Musical is ultimately that the music doesn’t help it and in fact steers the story away from its course in too many instances.

I’d like to see them go back to the drawing board and thread this together, better.  I would not it call it a total failure.  But this show needs a reboot in the right direction. Rent the musical, has kinda already been done.

To note, this was a “technical rehearsal.”  I am making this notation as it has come to my attention that several voters on the Hollywood Fringe website are complaining that The Time Machine Musical is being unfairly reviewed because it is unfinished.

But let me make a simple point… in no way, does billing a show as an unfinished, in process, or  in preview excuse the undertaking as a whole from being well put together enough to tell a story, a good story that any audience, educated or not, can understand and follow, minus the technical aspects.

That being said, it is a show. Own it.

3 thoughts on “#HFF13: The Time Machine Musical at The Hollywood Fringe Festival”