The Last Days of Judas Iscariot at The Victory Theatre Center 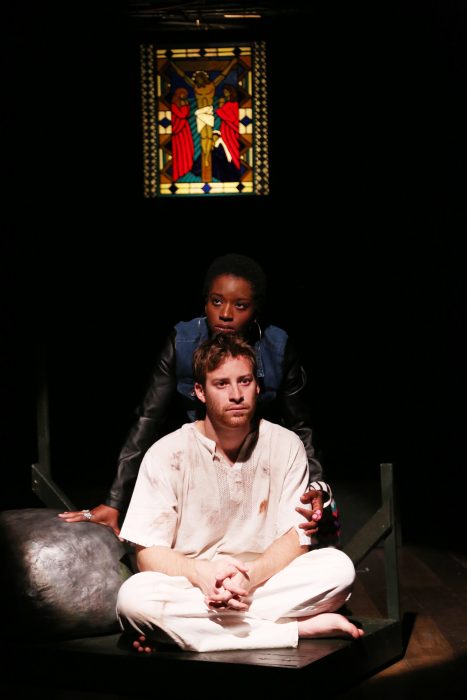 As we are in the Easter/Passover season, and of course with what was the imminent gathering of Papal heads to pick a new Pope (checked that off on Wednesday, March 13), I thought The Last Days of Judas Iscariot would be an interesting show to experience on the subject of faith, religion, dogma, Saints, Satan, and The Almighty’s higher plan – in this case – lower plan where Judas Iscariot is concerned.

The Last Days of Judas Iscariot is not a new work.  In its relative infancy, it is a piece that is still receiving a fair amount of attention and continues to be regularly mounted to address deep-seated cultural and spiritual issues of the day.

It originated in 2005 as a play by American playwright Stephen Adly Guirgis.  It was first staged off-Broadway at The Public Theater in New York City, on March 2nd, 2005, directed by Philip Seymour Hoffman with a cast that included Eric Bogosian (Law & Order Criminal Intent).  I know Eric’s work first hand, having performed alongside him for a short time.  It’s edgy, gritty, even mean, but most definitely meaty.  And that is at least one of the barometers I had, going into this show for review.

The Last Days of Judas Iscariot, tells the story of a court case over the ultimate fate of Judas Iscariot who is currently plunged into the depths of catatonic despair. The play uses flashbacks to an imagined childhood, and lawyers who call for the testimonies of such witnesses as Mother Teresa, Caiaphas (the Roman-appointed Jewish high priest who is said to have organized the plot to kill Jesus as well as being involved in the Sanhedrin trial), Saint Monica (whose namesake is our very own Santa Monica Blvd), Sigmund Freud, and Satan.

In 2005, it was received fairly positively by such news outlets as Curtain Up. However, NY Magazine said that for $50 a ticket, “LAB (Labyrinth Theatre, the playwright’s current home) might eventually want to put forth a finished product.”  The later West End production which also met with almost positive unanimous reviews was then busted by the Times Online with 3 out of 5 stars, saying “Too much New York – maybe. One doesn’t want an earnestly pious, reverential play. But do we want one which tries to make big, big issues palatable by coating them not with sugar but, at times, with bubblegum?”

That being recounted, my review begins… 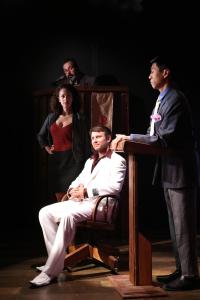 Judas is unable to defend himself, unable to speak, unable to move past the betrayal of friends.  Betrayal takes on an expanded form in this play. It is not simply relegated to Judas’ one act.  As we discover through testimony and recall, by many of the characters, even the good ones are complicit.  In fact, Jesus himself, as Judas’ best friend, has the biggest, most surprising role to play.  In Iscariot, we are presented with the question, “Who is actually good or evil?” Or, at least, “Who is actually right?  And who is really to blame, if anyone?” There is a yin yang effect in all of our actions.  And sometimes although what we do starts out, right, it turns out wrong.  And that is what we are judged for.  In some ways, this is Judas’ only sin.

One could say that Iscariot, is a somewhat sexy, modern-day, morality play. The version presented by the Victory Theatre is the lighter side of Iscariot, guided by a director with obvious religious grounding. We see this throughout in the tone of the performance overall and also in the minor indulgences actors are allowed to take in their respective emotional lives. There are tepid displays of beatific mood.  On the other hand overwrought violence in moments where the text should be sufficient, suggesting that the cast didn’t trust that they themselves were enough.

Outstanding performances by Patrick Riviere, the show’s director, as Caiaphas the Elder.  Mr. Riviere is definitely a heavy who can stand his ground and it shows during his cynical debate with the prosecution for evidence of goodness in Judas.

Mark Erickson (Satan) is divinely diabolical in a Damien-all-grown-up kind of way. As the recalcitrant Fallen Angel, he is a snarling, menacing, lying, little, charmer who is so smoothly, distempered, that even when he “crucifies” the argument and character assassinates the prosecution, through a series of factual and complicated lies, when he delivers the line, “Never let is be said that the Prince of Lies stood in the way of the truth,” he is utterly believable.  He gets away with it Scott-free because, although, spun in a deliberate, wrong direction, all of his words are true. 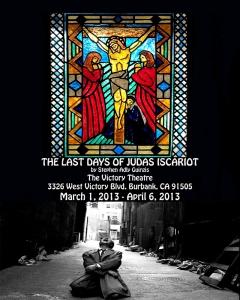 Jon Gentry, the most street tough, m-fer of a soldier, takes Pontius Pilate to the limit with his “you can’t handle the truth” display of hard core righteousness.  He has sentenced thousands of people to death and sentenced a man, Jesus, to death, even though he knew the man was innocent.  But he does if for loyalty to his country and to keep peace in a city ready to explode in a radical revolution with one wrong move. Semper Fi!

Faith Imafidon throws down an outlandish set of entertaining, ghetto raps, and quips but gives us ultimately a gentle St. Monica capable of deeply tender empathy, ready to go to battle in the fight for Judas with a direct line to God’s ear.  She’s a doer.  And – she DOES!

Finally, one of the funniest bits in the show was Robin Michelle McClamb’s spot-on mimic of the “beautiful, iconic, virgin” Mother Teresa.  From being tone-deaf to her stance on motherhood, faith, and abortion, Ms. McClamb’s portrayal is hysterical and deft as she leads us down a path that reveals the “not yet a saint’s” quite myopic, even mean-spirited, opinions about people, especially modern-day women. Her character work here is intricate.

Through the surprises in the script, the entire cast as an ensemble very much stages a well, worth experiencing rendition of this play.  On the whole, The Last Days of Judas Iscariot, as presented by the Victory Theatre is a carefully measured, well thought out piece that brings to light, the most pressing issue of forgiveness.  It’s a bona fide, street side, passion play.