‘Plays in the Park’ at the Promenade Playhouse 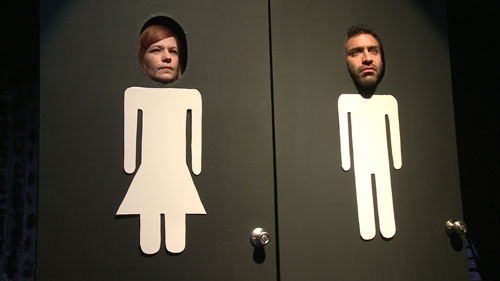 The house lights are already up and we are at the opening. The set is dressed with silver leaves “falling” in front of a gray curtain, a portal, a glimpse into moments happening in the present.  The lull of a classical guitarist plays nearby what looks like a homeless man laying on a park bench with a Teddy Bear.  It is a soft, quiet, slightly somber beginning leading our hearts by strings.

Guitar playing and other continuous, musical arrangements, appears to be a current popular novelty in non-musical staged productions as it seems I’ve encountered this device several times lately.  The initial angst of wondering if I was going to have to deal with the nuisance of an uninterrupted score subversing the drama did put me off at first.  But, as it turned out, all of the music and singing was placed just right in this off-kilter anthology of small vignettes called, Plays in the Park currently showing at the Promenade Playhouse in Santa Monica, CA.

Fully landing this show is the stunningly talented Leah Ludwig who… transforms in the vocals. 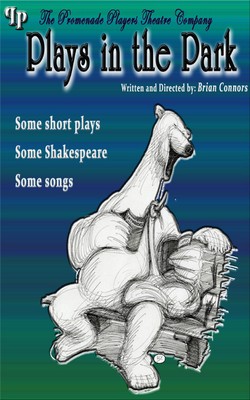 Naive, sweet and simplistic, this series of pithy, humorous, dramas,  is uncomplicated and easy for theatergoers to enjoy, even if not exactly revelatory. Perfectly Meisner is what might most accurately describe the writing of former Rutgers University and long time, successful actor, writer, director, Brian Connors’, Plays in the Park.  Listening purely to the dialog brought me back to former days in acting classes spent doing repetition exercises and hearing my teacher yell out “repeat!”  I secretly kept thinking Sandy Meisner would definitely approve but he might also say, “step it up.”

This latest version of the production, which previously included an all-star cast featuring Mark Rydell, Ed Asner, George Segal, Esai Morales & Stephen Collins, does a lot less to drive the audience to something or go somewhere else, as it stays fixed in the “oh how cute and mildly saccharin” genre.

That isn’t necessarily a bad thing.  Nor is this a terrible criticism.  The plays move along quite well, stay light and are thoroughly amusing. But the cast as a whole, although wonderfully talented, charming and promising as an ensemble, is not strong enough in instances as individuals, to offer the kind of nuanced impact a group of more evenly seasoned thespians might add to this eclectic mixture of shorts plays which includes the titles, Swans, Oxymorons, Marcia and Marcus and He and She.

On the other hand, there were some incredible performances endowed with marvelous, refined, skill, particularly by Danette Garrelts of He & She as was her He counterpart Alain Washnevsky, who was particularly on the mark, witty and utterly funny. Fully landing this show is the stunningly talented Leah Ludwig who thrives as the underdog in all of her scenes and transforms in the vocals.  Ms. Ludwig brings presence and weight in measured amounts and in precise moments throughout.

The highlight of this show is the curious use of Shakespeare’s soliloquies and monologues that although textually have nothing whatsoever to do with Shakespearean presentation, never-the-less, oddly and subtly match the intention of its players in their respective moments.  It is the brainchild of this work in the most un-gimmicky way.

As always, however, it comes down to the audience. And this one is certainly a pleaser.  I have to admit to being completely satisfied and in no hurry to be transfigured as I would expect to be in a much heavier drama.

Overall, in its current form, Plays in the Park provides clever, feel-good entertainment worth the ticket.