Esenherz’s upcoming L.A. exhibition at Axiom Contemporary titled LIFE POST 12212012, is a multimedia show with paintings, sculptures, installations and video that will elucidate aspects of a Doomsday Scenerio.

At the end of last year Esenherz had made a decision to have an exhibition titled “LIFE POST 12212012” indicating this number also known as DOOMSDAY.
“In the beginning all seemed to be easy”, Esenherz stated.  At the time, his own narrow judgement about this subject basically concluded that; ‘all media promoted DOOMSDAY scenerios are propaganda, conspiracy theories are single minded, DOOMSDAY is manmade starting with the industrial revolution and after all, the Mayan calendar simply ends to start a new era.’

Well, a few months into the preparations and with 1000’s of hours of research, Esenherz realized the overwhelming complexity of this subject.  There was scientific knowledge mixing with predictions leading to Religion and Aliens.  WOW!!  This is going to be bigger than he thought.
Meanwhile his jurisdiction had broadened so much, that it became a new challenge to narrow down this concept to a final equation.

Esenherz says, ‘Among all species on Earth, humans are the sole inhabitants capable of altering, exploiting, and subsequently destroying nature.  Therefore, the search for aliens is an absurd quest. Yes, all of the media promoted DOOMSDAY scenarios will occur at one point in our future.  For now, experience LIFEPOST 12212012 at Axiom Contemporary, but you’ve got to be gentler with your/our home.’ 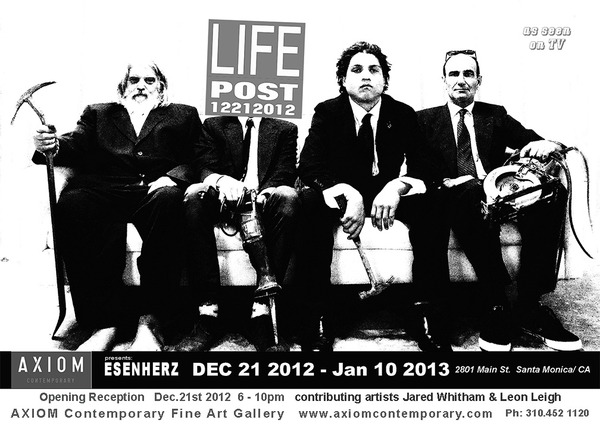