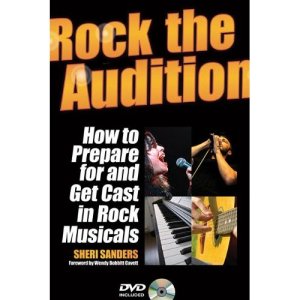 So if you didn’t audition for the latest rock musicals that have hit LA from Green Day’s American Idiot,  Hair: The American Tribal Love-Rock Musical, Hedwig and the Angry Inch, set in the 1970s era of glam rock, We Will Rock You, based on the music of Queen, and set 300 years in the future on “Planet Mall” where making music is forbidden but lead character Galileo is a rebel who hears music in his head and follows his destiny against all adversity, including the Killer Queen, and Rock of Ages, set on the Sunset Strip in the late 1980s, a time of big-haired metal bands, (recently made into a film starring Tom Cruise set for a Summer 2012 release), just because you had no idea what-so-ever, how to actually audition for a punk, spikey-haired, leather, pop, rock & roll, Gen Xer meets Hipster, kinda show — you can belt out a note of relief.  You’re secret weapon is now available.

Actually she was here in  Los Angeles at the Lyric Theatre direct from New York City this past February 2012 teaching more than a few Angelenos  just how Rock(in’) The Audition is really done. — I’m talking about, Broadway superstar Sheri Sanders.

This is not your normal prep class.  Don’t expect to be babied or bullied.  But do expect be scared straight into giving the best 1 minute performance you have ever pulled out of your hat.  Because getting the part in a modern rock musical is not for the faint of heart.  It’s not Rogers or Hammerstein, Sondheim or Gershwin.  You won’t be able to rely on your operatic training alone.  You’ll need some hootspa.  Heck you’ll need some downright guts!  It’s about style.  And it’s about singing way out of the box.  But, surprise, surprise, you’ll actually have to learn your history first.

What does it really mean to throw down a rock musical theatrical style?  Well, according to Sheri, you’ve got know a little something about the times you are singing in and singing from.  Meaning — character work, body language, psychology, politics — translate that — behaviors.  Every decade has its particulars, its freedoms, its restrictions, it’s nuances — the 50’s, 60’s, 70’s, 80’s, 90’s.  Physically and musically every decade has been different.  So you’ve got to begin there.

I was invited to the Lyric Theatre in Hollywood to sit in and watch the classwork for one of my favorite dance music eras – Disco – one of THE most difficult musical audition styles to sing.  I had so much fun that I almost forgot I wasn’t a student!

Regularly stationed in New York City, Sheri just published a book about what it takes to Rock The Audition on Broadway and everywhere else.  Offering insights like:

Acting your next rock song will be profound!  In other words,

One thought on “Rock My Musical Audition Sheri Sanders!”