My Brooklyn Hamlet Comes to Hollywood 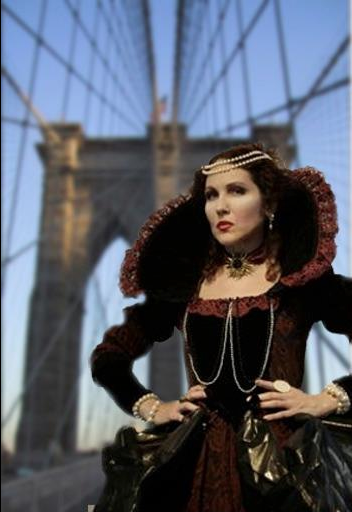 It all comes down to reality.  It’s fine with me. ~(pre-show music), Billy Joel, New York State of Mind

How do you deal with your father murdering your mother, then marrying your mother’s sister – your aunt, suddenly becoming estranged from your half brother – your mother’s son, for not wanting to believe any of it actually happened, losing your entire inheritance – stolen from your father who originally willed it to you, breaking up with your fiancé in the interim, discovering you are no longer daddy’s little girl and switching gears from relationships with men to women – Shakespeare of course!

In a shabby room housed in green carpeting, old, slightly worn furniture, Elizabethan stained-glass windows, a painting or photograph of each of her parents and a whole lot of outrageous memories, playwright and star performer, Brenda Adelman, along with director John Coppola, both New York natives, present an almost unbelievable, insanely twisted, one-woman, modern Bronx Tale filled with happy memories and tragic outcomes in My Brooklyn Hamlet, now playing at Studio C Artists on Theatre Row in Hollywood, CA. 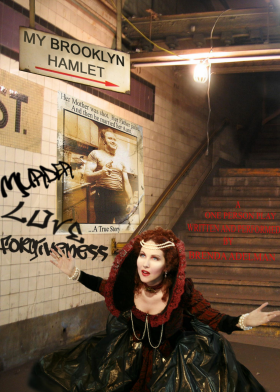 Part family comedy, part Greek tragedy, My Brooklyn Hamlet is Brenda’s very true story about loyalty, sex, obsession, love, betrayal, murder and most of all, the awesome power of forgiveness.

Right from the start with the portentous, mood-setting music of Carmina Burana playing as she enters the stage wearing a symbolically, blood-red, farthingaled gown, corseted, ruffed, purled & partletted, jeweled and filled with the power of words, Ms. Adelman breaks her tale in the bard’s iambic pentameter, which is fully a direct parallel to the doomed Prince of Denmark.  It is everything dramatic.  She is numbed and scarred.  Having been torn and caught in the confusing line of fire throughout her entire life, even sometimes a continent away, between two manipulators who emotionally push her to one extreme level of guilt to another.  She must decide in the end, how she will find the strength to no longer stay silent, and either act upon her desire for revenge and throw herself fully onto a path that will surely lead to a Hamlet-like destruction or to find compassion and become the heroine of her own life with love and exculpation.

One can only begin at the beginning with this tale and Ms. Adelman takes us, quite squarely and without trepidation, in typical ‘shoot from the hip’ East Coast style, through the sometimes absurd, sometimes traumatizing events of the comical tragedy, that only a nice Jewish princess growing up in the endowed fortune of her father’s lucrative Brooklyn car business, could relate.  From practically birth to her adult life she recounts the special and important moments spent with and witness to her mother, a world traveling, obsessive fulfillment seeking, bohemian photo artist (al la Diane Arbus with more of a penchant for S&M – “I wouldn’t be an artist if I didn’t piss off somebody”) and her father, a simple, chain cigar smoking, somewhat cruder, self-made, auto industry ‘savant’ with an insatiable need for deception and attention from other women.

Although often shocking, much of it is quite funny actually filled with the characterizations and mimes of her parents, posturing, tantrums and general milieu of melodrama that envelopes her.  Ms. Adelman keeps the dialog raw and surprisingly on the lighter side, given the heaviness of the subject matter which she herself, has actually lived through.  It is not a heart-wrenching auto-biography but rather an expressive and fascinating recitation. There are a few not-quite-so-well crafted transitions during this performance and a moment or two feels a bit skipped over.  However, Ms. Adelman’s style is so refreshingly natural and forthright as a story teller that the chronicle is well paced and moves quickly without any truly awkward pauses.  Growing up daddy’s little girl has so many advantages, world travel, foreign living, theater, art, popularity, best friends, Brooklyn-Italians boyfriends and being the great love of her father’s life “Brenda pretenda, my little defenda!”  Any why oh why can’t I have a healthy relationship with a man is not so hard to figure out for Ms. Adelman.  It is however almost impossible to break the cycle of insanity, not for the lack of trying.

Profound in it’s outcome.  Brenda Adelman is able to wield the mighty power of grace and bestow a kind of clemency that allows her to get past the ugliness and pain of tragedy to a love of herself and most of all both her mother and her father.  As in the words her mother would say every evening at her bedtime goodnight, “To Thine Own Self Be True,” Ms. Adelman, finds a way to do what is right for everyone.

My Brooklyn Hamlet is a creatively, candid, self-realized composition.

2 thoughts on “My Brooklyn Hamlet Comes to Hollywood”