Monkey Adored at the Rogue Machine 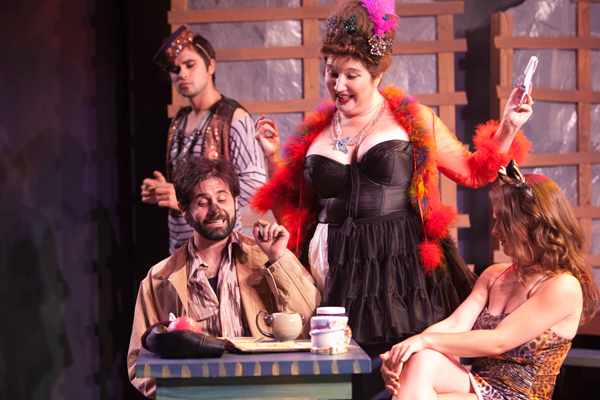 The following is a reprint of the original review on LA Theatre Review:

In 1947 George Orwell wrote Animal Farm, an allegory about events leading up to and during Stalinism. It contained a very human story played out by animals, who attempted to address corruption, wickedness, indifference and greed, doing so by liberating themselves from human bondage, but whose chief characters in the end become very human and ultimately come to embody the lowest characteristics of their oppressors.

By comparison, Monkey Adored, currently in its world premiere at Rogue Machine, an original, much more humorous fable by Henry Murray, elucidates the politics of gender, love, humans and animalistic behavior.

Through allegorical collage, puppetry, projection and “animal magnetism” Mr. Murray explores the ideas of experientiality versus DNA – are we who we are because of our parents, environment, experiences or simply because we are “born this way?” Is it possible to overcome ourselves, our emotions, our sexual identities, our prejudices and our genetics? It also reveals our ultimate need for very human connection with one another regardless of which side of the argument you choose. And it addresses the relationship between sexuality and violence. To say it is a reflection of ourselves as human beings is an understatement and yet Murray mirrors us all brilliantly here.

Mr. Murray’s prime suspects in this tale are a monkey – Sonny Bonobo, a cat – Madeline Kahn, and a dog – Brown Spot, who are partly caught up in, then choose to become very active in, plotting the revolution against humans who brutally “torture” and use them for “animal testing.” Like humans these creatures’ lives are complex: they fall in love, in lust, they cross species and cross genders.

The story begins seemingly “just another day” for all where the ever desirous and monogamous, Brown Spot (David Mauer) is in love with sexually liberated Sonny Bonobo (Edward Tournier), just mysteriously released from a lab and virtually unharmed except for a painful head wound, who takes “turns” with everyone including loose kitty, Madeline Kahn (Amanda Mauer), who in turn, after carnally cuddling with everyone else, sour from Sonny’s repeated abandonment of her needs, and against all reason, falls for stalker, terrorist, rat, James Rat (Patrick Flanagan).

Their lives are mostly ordinary, so it seems, meeting and flirting at Le Café Café, run by the lively cancer survivor Elaine Ostrich played by Jennifer Taub and the positively, postulate spouting, Penguinito played by Ron Bottitta, atmosphered by the occasional homemade bomb causing the diner to go dark to avoid discovery. Most of the time each characters’ problems and dilemmas, skittishes and slight skirmishes are solved sexually and peacefully among all with the occasional joke, irony and universal wisdom that manages to go right over their (dog, monkey, kitty) narcissistic, needy heads, until James Rat, through a secret rendezvous, convinces Bonobo, who is normally and characteristically (as the Bonobo monkey species goes) passive and carefree, to fight for the cause by showing him an escaped tortured Ape hiding in the sewers.

Suddenly Bonobo becomes anything but phlegmatic and elects himself as the suicide bomber who will take the humans at the lab down. Ah, a behavioral change has quite unpredictably occurred in Bonobo. This variation partly confuses and frightens his friends, especially his devoted lover Brown Spot who pleads with him not to do it – essentially “change.” So desperate is Brown Spot to have Bonobo live that he, characteristically loyal to the humans (as dogs go), leads the lab technician who arrives in the form of a giant and frightening Puppet to re-capture the monkey. Finally out of guilt and love Brown Spot attempts to take Bonobo’s place, but fails, compelled by his “man’s best friend” faithfulness. The cause is lost and the rest are left to makes sense of what has happened – in Madeline Kahn’s (cat) case, to raise and create a new future for the offspring of all three of her lovers.

Comedic, tragic and dark, Monkey Adored is superlative in execution, story and performance. The use of puppetry was brilliant, adding a skillful, critical element and artistry to stagecraft that thoroughly intrigued and plainly worked – the coup de gras of this piece.

The ending had less impact than hoped for in winding up this tale, but it never-the-less leaves us with a sanguine view of animal-kind /mankind.

Every collaborator in this production deserves a well earned note:

Music by composer Michael Wells from one of our LA favorites, Lost Moon Radio, and Sound Design by Joseph Slawinsi, added levity and subtlety throughout along with the additional humorous intermission tunes like What’s New Pussycat by Tom Jones and Shock the Monkey by Peter Gabriel.