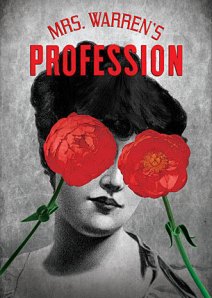 Reviewed by Carlos Stafford, The Model Critic
Looking back to George Bernard Shaw’s comedy, Mrs. Warren’s Profession, you’d think the present times would differ vastly from those of Victorian England, when the play was set and finally presented in 1902.  What’s so amazing to realize, in this Roundabout Theater production, is that culture, along with accepted social morality, moves through time, and transforms as slowly as a huge ship coming about.
Shaw, of course, is famous for poking fun at established shibboleths, false moral rectitude, and generally, for always pointing an accusing finger at hypocrisy.  He accomplished this with his genius for keen, penetrating views on humanity, combined with a laser wit.
Cherry Jones, always wonderful, and a true gift to the stage, plays the eponymous Mrs Warren, or Kitty, a prostitute so successful, she has actually gone global with brothels all over Europe. ( Or, in a modern equivalent, she outsourced her enterprise, like McDonald’s, Google, or Starbucks.) The words prostitute and brothel are never mentioned, but the audience gets the picture quickly.
Her daughter, Vivie has been away studying at Cambridge, and before that, at boarding schools.  Supported fully along the way, she is unaware of her mother’s profession.  The play opens with a rare meeting between mother and daughter; in a bucolic setting, at a cottage in the country.
As Vivie awaits her mother’s arrival, we meet Praed, a dear old friend of Kitty’s.  He is kind, gentlemanly and as we see, an eternal optimist.  As they meet, he quickly sees Vivie is unaware of her mother’s life, and doesn’t know how to break the news to the poor girl.  Vivie, having just graduated, prim and proper, scholarly, with a fierce, cold independence, represents what was called the “New Woman” of her day; a young woman breaking away from the bondage of Victorian convention. 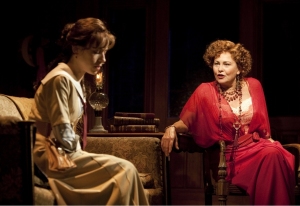 When Kitty arrives, flamboyantly dressed in red, with her sleazy friend, Sir George Crofts, Crofts is immediately smitten with Vivie. Rich, heartless, and a man of the world, he quickly turns his attentions to the young woman.  As he surveys the situation, he is struck with the idea that Vivie may actually be his daughter since Kitty never revealed to anyone who the father was. The local country pastor arrives looking for his good-for-nothing son, Frank Gardner, and to his chagrin, has an awkward moment when he recognizes Kitty from a dubious, long-ago encounter.  As he sees Vivie,  we now know that he too could be Vivie’s father as well.  Frank Gardner, the pastor’s son, having dropped by earlier, has also fallen for Vivie’s charm.  Little does he know, and is later revealed, that indeed Vivie is his half-sister, and his father, is also Vivie’s father.

That evening, while alone in the cottage, Kitty and Vivie are able to talk quietly.  Kitty tries to explain to her daughter her life, and what led up to her choices; it’s a poignant tale of an abusive childhood, squalor, and economic privation, an individual corned by her status and gender.  She moves Vivie to sympathy and understanding as we see her struggle to drop her judgements, and temporarily at least, accept her mother.
Shaw’s style of writing–unsentimental, unromantic, clear-eyed views of society was emblematic of the Naturalist Movement in literature.  Whores became whores because of political and economic realities, not because they were fallen angels.  This literary movement developed from the Realist Movement of mid-nineteenth century France with the likes of Emile Zola, who wrote about a Parisian prostitute in his famous work, “Nana.” Unadorned, he presented life as it was. The Naturalists did the same, but added the scrutiny of science to glean meanings from the economic, social, hereditary aspects of the human condition.  It was the time of Charles Darwin, and “survival of the fittest,” and Karl Marx.  Another fitting example in drama would be “A Doll’s House,” by Ibsen–a woman trapped in a marriage by social conventions, trying to escape.  Or “Miss Julie,” by August Strindberg, where social class is destiny.   In America, we had the novelist Jack London, Frank Norris, and Theodore Dreiser  Emotion was kept at a minimum, and bold, hard realities were presented.
Back to the story:  Vivie is proposed to by the older  Crofts.  Repulsed, he wades in further to present his case.  He tells her that she would benefit by marrying him because he is extremely wealthy, and in any case, he will soon die, leaving her everything. He then informs Vivie, that Kitty has brothels all over Europe and that she too is very wealthy, and wants her to have all the riches of life. The young suitor, Frank Gardner enters, and they spar with words.  Crofts then reveals at the telling moment that they are both brother and sister, and that they could never marry.
Crushed, but determined and confident, Vivie flees for the city to pursue her own life, and on her own terms.  Kitty desperately wanting her daughter’s respect, arrives at her office where they confront each other with shocking disapproval and opposing viewpoints.  As with another famous Shaw work, “Sister Barbara,” the characters pull no punches, as they philosophically fight from opposing corners, to determine what is Right. The audience is left stunned and challenged, and it’s not a cozy ending.
This production was outstanding. The sets were charming and transporting.  Cherry Jones was superb as Mrs. Warren. Stephanie Jones, standing in for Sally Hawkins, was excellent as Vivie, as she stood her ground, and Mark Harilick, was perfectly sinister, unrepentant, and real.
Finally, Shaw combines many brilliant notes in his writing– he distills universal social principles, the comedy of human actions, and sympathy for the nature of man.  He is never vague and always robust in his well-crafted meaning, and bravely looks to the heart of the matter.  He surely came before “spin,” and even though at times one could take him as being dogmatic and preachy, he is certainly our cultural and artistic treasure.